From the GM: The Case for a Vikings 1st-Round CB & Deshaun Watson Fallout at League Meeting 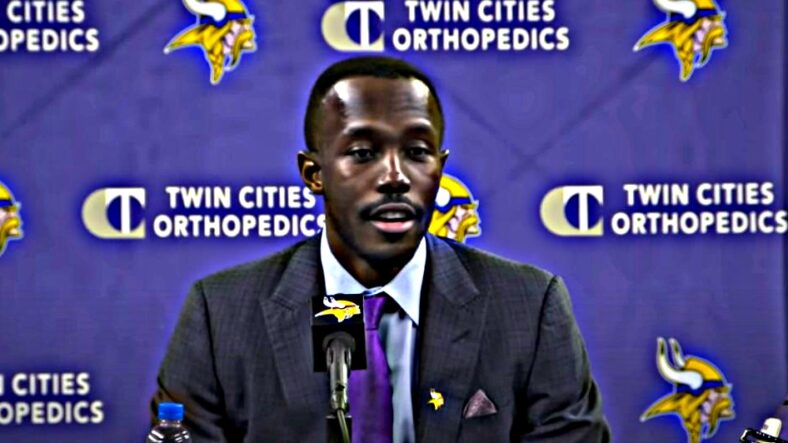 The NFL Draft is three weeks away, and teams are fine-tuning their draft boards as they bring players of interest to their facilities for more interviews, final physicals, and in some cases, more on-field testing.

Behind the scenes, the eternal debate is taking place for GMs such as the Vikings’ Kwesi Adofo-Mensah with scouts and coaches on the subject of drafting the proverbial best player available vs. taking a player at a position of need, especially in the first round.

I was in these draft meetings for 20 plus years as a GM and team president. I always said we should pick the best player available unless it was a quarterback, and we had a franchise QB already on the team (which I would say is not the case with Kirk Cousins, although he is a very good QB).

I subscribed to the theory I learned early in my Vikings career from two great player personnel men and talent evaluators—Jerry Reichow and Frank Gilliam—which was “never pass up a potentially great, blue-chip player to take a good player at a position of need.”

A prime example of this philosophy in action was when we selected future Hall of Fame receiver Randy Moss in the first round in 1998. We already had two great, consistent 1,000 plus yard receivers in Cris Carter and Jake Reed, but we had Moss rated as a top-five player and by far the best player available when we took him at No. 21. The results were phenomenal as he caught 17 TD passes, was Rookie of the Year, and a big part of the 15-1 team that lost in OT in the NFC title game.

This brings me to making the case for Adofo-Mensah—with input from his scouting staff and head coach Kevin O’Connell– to take one of the premier cornerbacks in this year’s first-round at the Vikings’ No. 12 overall spot. First, I repeat—unless there is a player at another position who clearly is higher rated and a potential perennial Pro Bowler—then the greatest need for this Vikings team is a cornerback who can start Day One and quickly develop into a shutdown corner.

I like almost all the moves the new Minnesota football regime has made in free agency, especially in attempting to shore up a shaky defense. The front seven looks stronger with two elite pass rushers (if they stay injury-free) in Danielle Hunter and Za’Darius Smith. The re-signing of corner Patrick Peterson at a pay reduction was vital after he played well last season, and Peterson provides veteran stability along with Harrison Smith in the secondary.

I see slot corner Chandon Sullivan as a good signing, especially in potentially strengthening the Vikings pass defense while weakening their biggest rival—the Packers (where Sullivan was an effective player). I don’t think the team should give up on Cam Dantzler, the former third-rounder who is talented but too often lax in coverage (who can forget his retreating into the end zone on the final play of the disastrous loss in Detroit last season). There’s talent to tap into and improve with former draftees at corner in Kris Boyd and Harrison Hand, along with veteran depth in Nate Hairston, who played for new Vikings defensive coordinator Ed Donatell in Denver and has 17 starts over his six seasons.

Add an elite corner to this group, and Minnesota’s biggest area of concern very possibly becomes a position of strength. Think of a Jalen Ramsey-type player opposite Peterson with Sullivan in the slot and a coached-up Dantzler as the fourth corner. That’s what one of the top three corners in this draft–either Cincinnati’s Ahmad “Sauce” Gardner, LSU’s Derek Stingley Jr., or Washington’s Trent McDuffie– could bring to the Vikings defense. Perhaps it would be similar to how much Xavier Rhodes at his Pro Bowl best contributed to the Vikings top-ranked defense in 2017 by handling the other team’s best receiver as he helped lead the team to the NFC title game.

At 6-foot-3, 200 pounds, Gardner is a big corner like Rhodes, who runs well (4.4 speed) and has great agility yet is an aggressive tackler and blitzer. He appears to be the highest-rated of this trio, and the Vikings may have to trade up a few spots to get him, but they’d probably be fine with a smaller yet solid performer in McDuffie or the intriguing Stingley, who was coached last season at LSU by Vikings secondary coach Daronte Jones.

Stingley is an elite athlete who had a terrific freshman season with six interceptions but was inconsistent in 2020 and 2021. He is coming off a torn ligament in his foot that derailed his 2021 season, and the Vikings medical staff will have to give the thumbs up before the team takes him as a more risky pick.

Even if the Vikings take one of these top three corners in the first round, there’s a good chance the team will grab another corner in a later round to add competition at this position that must improve for Minnesota to return to the playoffs this season.

Vikings add another veteran interior offensive lineman: With the recent signing of guard Chris Reed who has seven years experience and 29 starts, including six with the Colts last season, Adofo-Mensah and O’Connell are creating major competition for the right guard spot. Oli Udoh was the starter last season, and he will battle Reed, two other free-agent signees in Jesse Davis (72 career starts in Miami), and Austin Schlottmann, who played four years in Denver (7 starts) and was coached there by new Vikings O-line coach Chris Kuper. And let’s not forget last year’s third-round pick Wyatt Davis who was the Big Ten Offensive Lineman of the Year at Ohio State but languished on the bench last season. Udoh also can back up both tackle spots if he’s not the starter at guard.

At the NFL Annual Meeting in Florida last week, there was plenty of grumbling among the owners and GMs about the Browns trading multiple high draft picks and guaranteeing Deshaun Watson a record $230 million for a player facing 22 civil lawsuits for sexual assault and harassment.

Baltimore owner Steve Bisciotti, whose team is trying to extend former league MVP Lamar Jackson’s contract, said, “It complicates the quarterback market. I wish they hadn’t guaranteed the whole contract. I don’t know that he should’ve been the first guy to get a fully guaranteed contract. It’ll make negotiations harder with others. But it doesn’t necessarily mean that we have to play that game. We’ll see.”

Of course, we know that Watson is not the first player to get a fully guaranteed contract, as plenty of draft choices have in recent years, along with a prime example in Cousins’ initial Vikings contract (but that was $84 million, not $230 million so I understand your angst, Steve).

Speaking of Cousins, it also was interesting to hear Bisciotti mention Cousins in talking about the possibility of Jackson playing out his fifth-year option and then being franchise tagged for two years as Cousins was in Washington before signing his big Vikings deal. Bisciotti said in that scenario, Jackson could say, “That gives me three years to win the Super Bowl so you can make me a $60 million (per year) quarterback because that’s where it will be four years from now.”