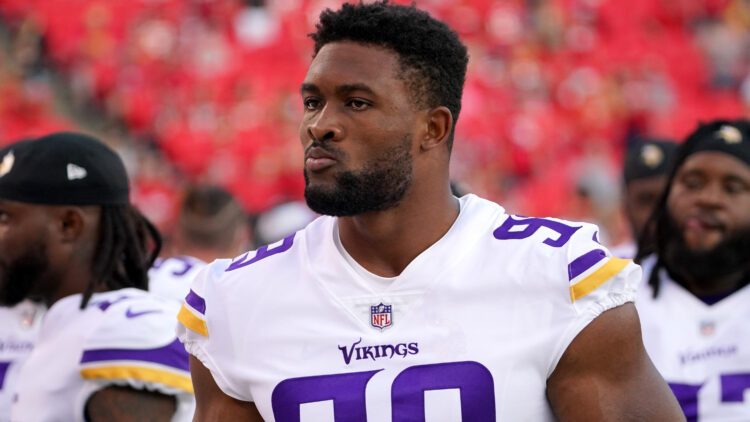 With the Kirk Cousins contract resolved, the Vikings are now grappling with Priority No. 2 as the 2022 NFL league year is officially underway. That, of course, is their superstar but injury risk defensive end Danielle Hunter.

Something’s gotta give by this Sunday when Hunter’s $18 million roster bonus kicks in, and the Vikings do not want to have that bonus hit the books, thus locking in a $26 million cap hit for 2022.

Along with Cousins’ extension freeing up $14 million of cap room, the team is restructuring Harrison Smith’s contract to reduce his cap hit by $6 million this year. Combined with the $6 million saved by releasing Michael Pierce, new GM Kwesi Adofo-Mensah has maneuvered his way to be able to make several non-splashy but necessary moves in the first week of free agency.

These include the signings of four newcomers: ex-Bills defensive tackle Harrison Phillips to replace Pierce, ex-Cardinals linebacker Jordan Hicks who likely will take over for Anthony Barr, former Rams tight end Johnny Mundt (after the departure of Tyler Conklin to the Jets), and offensive lineman Austin Schlottmann who will be part of the attempt to take on the swing-role of Mason Cole who is Pittsburgh-bound.

The Vikings also have spent $2.43 million to tender kicker Greg Joseph and have re-signed punter Jordan Berry with the new-found cap space.

Now they need help from Hunter in the form of a contract extension or restructure, and there have been rumblings of a possible trade that would unload his contract. If I’m Adofo-Mensah (and I’ve been in his role during salary cap crunch time), I want to keep the 27-year old, two-time Pro Bowler and hope Hunter can stay healthy so he can resume his role as one of the NFL’s top pass rushers (60.5 career sacks, youngest player in NFL history to reach 50 sacks).

In this QB-driven, pass-happy modern NFL, dominant pass rushers are valued right behind franchise quarterbacks. Hunter rebounded from the 2020 neck injury that cost him the entire season to have six sacks in seven games last year. If the Vikings’ team doctors feel he is fully recovered from his torn pec that cost him the last 10 games in 2021 and feels he has a reasonable chance to stay healthy moving forward, then I would feel confident enough to make a concerted effort to keep him in purple. That is, unless, another team makes an offer too good to pass up (such as multiple first-round picks that is highly unlikely for a player with an injury history).

I expect we’ll see a resolution similar to how the Vikings handled Cousins. That would be a one-year extension that converts Hunter’s $18 million roster bonus into a signing bonus and includes a couple of voidable years to lower his cap hit by about $13 million or more. Hunter won’t yet hit the pay grade he’s seeking, that of the league’s highest-paid pass rushers—T.J. Watt at $28 million per year and Joey Bosa at $27 million per year. He’ll probably fall in at the $20 million per year level where two other older but still premier pass rushers just signed—Von Miller with the Bills and Chandler Jones with the Raiders.

With the Hunter situation handled one way or another, the Vikings can then attack their major problem at cornerback by re-signing Patrick Peterson (who played well last season on a one-year, $8 million deal) and another vet free agent or two while emphasizing the corner position in next month’s draft with a first or second-round pick and a later round pick.

There likely will be more Vikings’ veteran contracts restructured as was done with Smith to enable the team to sign their upcoming 2022 draft class along with another free agent interior offensive lineman, probably an edge rusher for their defense (that will be a base 3-4 but mixing in 4-3 alignments) and perhaps a veteran safety to replace the departed Xavier Woods. But as I’ve said, I like second-year man Cam Bynum’s potential to step into the starting role, and the team could add a low-cost vet safety for depth and to compete with Bynum.

1.If it’s true as reported by ESPN late Thursday, then it’s great news for the Vikings that the Packers are trading all-pro receiver Davante Adams to the Raiders for two prime draft picks and possibly a player. This tells me that contract talks between the Packers and Adams on a long-term deal were not progressing well.

Adams was hit with the franchise tag and said he would not play under the one-year franchise tender. He reportedly will sign a Raiders contract in excess of $28 million per year, making him the league’s highest-paid receiver. Adams’ demands combined with the Packers precarious cap situation were the impetus for such a blockbuster move. If this comes to fruition, Aaron Rodgers will not be happy—once again.

2. Early big spenders—teams that step out early and often in free agency often make costly mistakes, and lowly Jacksonville is the desperate team that has made the most noise thus far with high priced signings of guard Brandon Scherff, wide receiver Christian Kirk, defensive tackle Foley Fatukasi, linebacker Foye Oluokun and tight end Evan Engram. The L.A. Chargers also have been one of the more active teams so far with the trade for Mack and the signing of former Patriots corner J.C. Jackson to a 5-year, $82.5 million deal while re-signing receiver Mike Williams for $20 million per year.

3. I thought the Rams’ signing of ex-Bears receiver Allen Robinson (3 years, $46.5 million) was intriguing and probably means Odell Beckham is done in L.A. after playing great for them in their Super Bowl run. The Rams have Robert Woods coming back from injury along with the NFL’s top receiver last season in Cooper Kupp, former second-round pick Van Jefferson and now Robinson. Plus, Beckham is coming off an ACL tear sustained in the Super Bowl that will likely cost him some games early next season. Again, it’s good news for the Vikings that Robinson is out of Chicago.

4. The Deshaun Watson tour of potential trade destinations has caused major problems in Cleveland as current starter Baker Mayfield now feels disrespected and wants to be traded after the Browns brass made a strong but unsuccessful effort to court Watson (who has a no-trade clause so he can choose where he wants to go). Hate to break the news to you, Baker, but after a relatively down year fueled in part by injuries, your market value isn’t great. So he’ll likely wind up playing at least one more year in Cleveland for $19 million on his fifth-year option, not a bad consolation prize for an average QB so far in his career.

Jeff Diamond is a former Vikings GM, former Tennessee Titans President and was selected NFL Executive of the Year after the Vikings’ 15-1 season in 1998. He now works for the NFL agent group IFA based in Minneapolis and does other sports consulting and media work along with college/corporate speaking. Follow him and direct message him on Twitter– @jeffdiamondnfl.