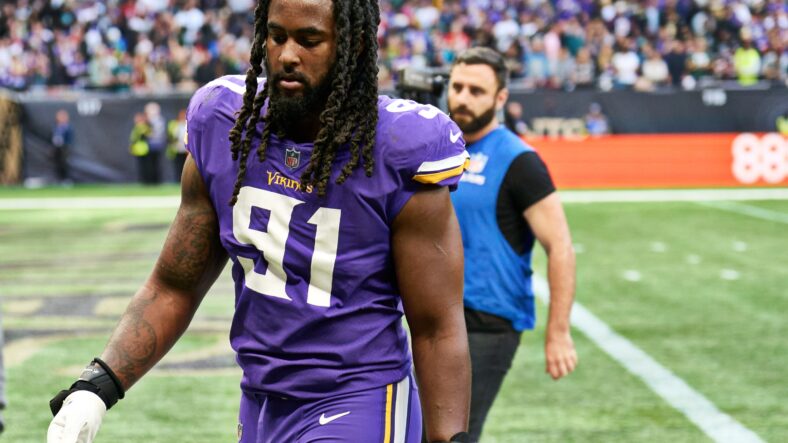 It’s Patrick Jones, a second-year defender selected by former Vikings general manager Rick Spielman in the 3rd Round of the 2021 NFL Draft.

Jones fired up an impressive performance against the Miami Dolphins in Week 6, continuing a production trend when given a chance. The usual “third pass rusher” for Minnesota, D.J. Wonnum, missed the game because of illness, and the ballclub didn’t miss a beat with Jones in the mix. In fact, the team improved.

The Pittsburgh alumnus notched 3 tackles, 2 sacks, 2 QB hits, and 2 tackles for loss in a 24-16 win over the Dolphins during 37 defensive snaps. Not bad.

Jones’ emergence is also a breath of fresh air because of his draft roots. When Kwesi Adofo-Mensah rolled into Minneapolis last January, he gradually enacted a purge of most men from the 2021 draft class, an odd occurrence for various players with the team for just one year. Indeed, 63% of Spielman’s final draft class has been banished from the 2022 roster, including (in draft order) Kellen Mond (QB), Chazz Surratt (LB), Wyatt Davis (OG), Janarius Robinson (EDGE), Ihmir Smith-Marsette (WR), Zach Davidson (TE), and Jaylen Twyman (DT). Only Christian Darrisaw (LT), Jones, Kene Nwangwu (RB), and Camryn Bynum (FS) remain.

In 2020, the Vikings traded for — and then traded away — defender Yannick Ngakoue in a span of about seven weeks. After the fact, Minnesota received Jones and cornerback Akayleb Evans as spoils from the Ngakoue clawback trade with the Baltimore Ravens. So, any contributions from Jones and Evans make the Ngakoue deal(s) look less foolish.

With six games under the Vikings belt — plus a nifty 5-1 start –Jones possesses a 68.9 grade from Pro Football Focus, the 13th-best score on the team. That mark isn’t groundbreaking but is an improvement from his 43.0 score in 2021, signifying a vast improvement from his freshman to sophomore campaign.

Moreover, Vikings fans have mixed opinions about the aforementioned Wonnum. Some believe he’s an opportunistic and gritty substitute for Hunter and Smith, whereas others feel he’s “just a guy.” If the second crowd is correct, an ascension of Jones up the depth chart bodes well for the Vikings future defensive planning.

In 15 career games, or 205 total defensive snaps, Jones has registered 13 tackles, 3 tackles for loss, and the 2 QB hits and sacks from the Dolphins game. He could be the type of talent who just needs playing time to shine. At Miami in Week 6 was reasonable evidence for it.

A perhaps prolific Jones also lessens the Vikings need for EDGE rushers early in next April’s draft. Heading into the 2022 season, several Vikings brains surmised it was probably time for the franchise to draft a new pass rusher, as Hunter’s injury history was becoming splotchy, and Smith turned 30 in September. But if Jones rips and roars throughout 2022, Minnesota could have a solution already in-house.

Finally, the only “knock” on the Hunter-Smith tandem — like, at all — is injury susceptibility. But the version of Jones on display against the Dolphins would reduce fans’ anxiety if Hunter and Smith miss time in the next 11 games.