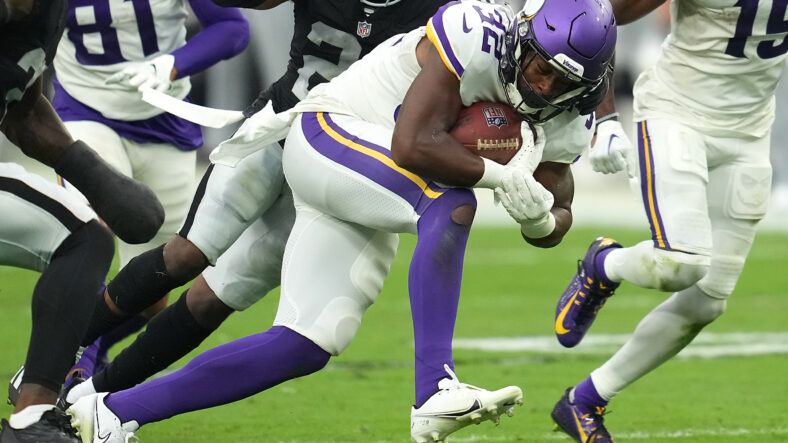 On Sunday, the Minnesota Vikings kicked off their 2022 preseason schedule with a road trip to face the Las Vegas Raiders. The Vikings would ultimately fall 26-20, but as we all know, the final scores of preseason games aren’t important. Instead, looking at how young players perform individually is much more valuable.

As the final score would indicate, there were many positives and negatives to take away from the game. But perhaps no one performed better for the Vikings than two of their recently drafted running backs, Kene Nwangwu and Ty Chandler.

Nwangwu was an All-Pro kick returner as a rookie in 2021. For 2022, the next step in his development was getting him involved more heavily in the offense. Known for his speed, he showed on Sunday that he possesses the ability to run between the tackles. He ran for 41 yards on seven carries against the Raiders and added two catches for 18 yards. This outpaced incumbent RB2 Alexander Mattison’s three carries for eight yards.

But this wasn’t even the most impressive running back performance of the day for the Vikings. Rookie Ty Chandler stepped in seamlessly for Nwangwu, carrying the ball five times for 50 yards. Also known for his speed, Chandler displayed vision and footwork to wind his way through running lanes.

Chandler also provided fans with the biggest highlight of the day. In the third quarter, Chandler fielded a kickoff at his own 2-yard line. He sprinted forward, bounced off a potential tackler, and reversed field for a 56-yard return.

While we don’t want to draw conclusions from one preseason game, Nwangwu and Chandler showed that the Vikings could potentially field a deep running back room. Neither will be relied on to carry the ball 20 times per game, but being able to complement Dalvin Cook throughout the season could lead to a healthier, more efficient Cook.

Their performances, and the up-and-down career of Mattison, also raise questions about who will be Cook’s primary backup in 2022. Mattison is entering a contract year, and he could now find himself expendable. Chandler was a fifth-round pick, which teeters on the line of being a lock on the final roster. But if he can turn out two more games like he did Sunday, his spot on the roster is a cinch.

So with Cook, Nwangwu, Chandler, and fullback C.J. Ham, will the Vikings see the need for a fifth running back? The Los Angeles Rams, head coach Kevin O’Connell’s former team, carried three running backs in 2021 and four in 2020. The Vikings have several other more important position battles across the roster. Carrying five running backs, especially when four have shown that they are more than capable of their roles, would be overkill for a team looking to air the ball out more in 2022.

This could lead to Mattison being a surprise cut at the end of the month. But it could also lead to the Vikings trying to trade him to a running back-hungry team in exchange for a center or backup quarterback. Trading Mattison likely wouldn’t lead to a healthy return and would probably be packaged with draft picks. But if it brought a formidable backup QB or a center that could push center Garrett Bradbury, it would be a smart move.

The roster is still far from set, with two games left in the preseason. But Nwangwu and Chandler took a big step in their quests to be contributors on the Vikings’ roster. Their performances will put the team in an ideal predicament where they may have to part ways with a capable player. At this point, Nwangwu and Chandler may have the inside track to being Cook’s primary backups.