What if the Vikings OL Is — Good? 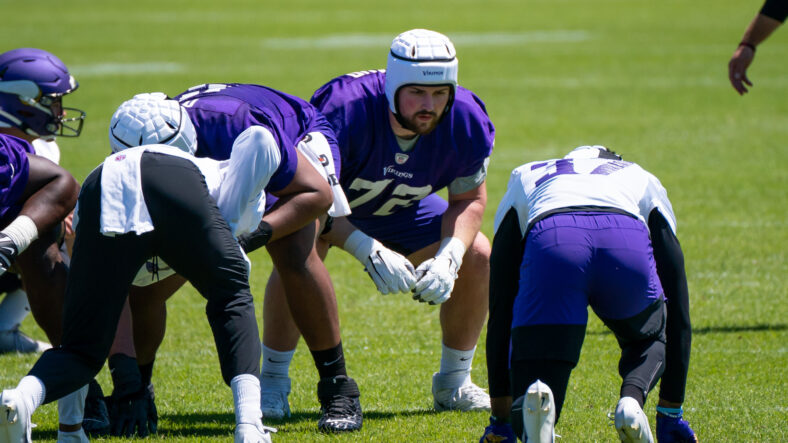 Over the last few seasons, the Minnesota Vikings have faced scrutiny for underperforming. Ultimately Mike Zimmer took the warranted fall alongside General Manager Rick Spielman. Although fingers have been pointed at the defense, Kirk Cousins, and others, the offensive line may have been the most egregious issue. What if that winds up not being the case in 2022?

Last year the Vikings used the 23rd overall pick on tackle Christian Darrisaw. Coming out of Virginia Tech, the hope was that he could step in and start immediately. The left tackle spot has been a rotating position of failure. After dealing with a few injuries, Darrisaw did wind up taking on the position and looking like a bookend of the future.

The Vikings already had Brian O’Neill on the right side, and he secured a big payday through performance since being selected 62nd overall back in 2018. Anchoring both sides of the offensive line has always been the most integral issue for a team looking to protect their quarterback, and it’s fair to argue that Kwesi Adofo-Mensah stepped into a situation where that has happened.

Moving in a spot on both sides of the line, both right and left guard positions appear to be in a good spot. Ezra Cleveland looks like a capable player on the left side, and the right side benefits from veteran depth. Jesse Davis, formerly with the Miami Dolphins, looks like he could be the starter. That said, Chris Reed has performed admirably for the Colts, and then there’s the intriguing rookie. Ed Ingram was taken 59th overall in the latest draft, and it shouldn’t be a shock that he could work his way into a starting role sooner rather than later.

Leaving just one spot left, it’s the guy in front of Kirk Cousins that could make or break this group as a whole. Garrett Bradbury was selected 18th overall in 2019, but it hasn’t been pretty. He’s largely been an ineffective turnstile, and his career highlight could be the deflected pass he caught against the Green Bay Packers last year. Obviously, he knows his performance has come under fire, but the Vikings also haven’t pushed to bring in an alternative. This might be the last chance for Bradbury to save his career with the purple.

There’s no denying what limitations have hampered Cousins and the Vikings offense over the years. A lot of them can be traced back to timing or opportunity, and by creating better avenues there, another step forward for the team can be reached. I don’t think we’re at a place to definitively suggest that Kevin O’Connell is going to have an elite unit in year one, but I think it’s plausible that the group isn’t a black hole for the team as well.

If Minnesota is going to surprise opponents or be a contender, it will be because they turn deficiencies into capitalized opportunities. The trenches are a good place to start.