Week 5: Bears at Vikings, According to Madden Simulation 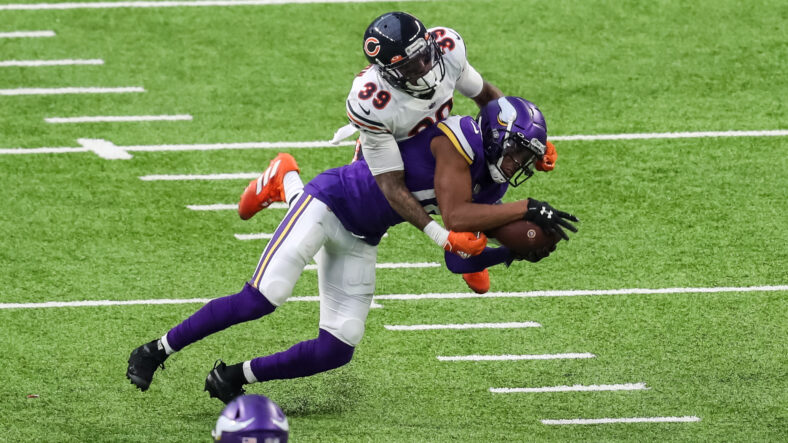 Week 5: Bears at Vikings, According to Madden Simulation

The Minnesota Vikings return home to U.S. Bank Stadium for a Week 5 tilt against the Chicago Bears. After traveling across the pond in Week 4 and eeking one out against a shorthanded New Orleans Saints team, Kevin O’Connell’s crew will look for a more convincing victory this week.

Last weekend, the Saints were without key players such as Jameis Winston, Michael Thomas, Alvin Kamara, and Andrus Peat. Still, Minnesota needed a last-second field goal miss to hang on for the win. Now coming in as seven-point favorites according to online bookmaker Bovada, Minnesota needs to respond with an easier win.

Here’s how the Madden sim shook out.

After getting behind 7-0 in the first quarter, the Vikings evened things before pulling ahead briefly in the 2nd quarter. Kirk Cousins connected with K.J. Osborn on a deep ball to give Minnesota its first score of the game. It was then a slant route from the one-yard line that Osborn hauled in to make it 14-7 Minnesota.

Before halftime, Justin Fields scrambled from the 12-yard-line, crossed the goal line to give Chicago a 14-point tally, and knot this one at intermission.

The Bears kept momentum rolling as the only team to score in the 3rd quarter. Khalil Herbert carried to the outside and ripped off a 35-yard run to make it 21-14. After the Bears kicked a field goal to increase their 4th quarter lead, Minnesota went to work.

Kirk Cousins is already responsible for two 4th quarter comebacks this season, and he went on to orchestrate another one. After driving the team down the field, Alexander Mattison plunged the ball in from the three-yard line to make it a three-point game, 24-21. After Minnesota forced a three-and-out, Cousins finally got the ball with just under two minutes left. Surgically dicing the Bears defense, Cousins connected with Adam Thielen on a 27-yard bullet in the end zone.

Leaving just 22 seconds for Chicago, Minnesota held on for a four-point victory.

The total yards were about even in this one, but Dalvin Cook contributed just 43 on the ground, and Minnesota rushed for only 61 yards. Cousins’ 255 yards through the air was the difference, and while the Bears held Justin Jefferson in check, the rest of his teammates got in work. Za’Darius Smith was the lone Vikings defender to sack Fields, but more than a few guys registered tackles for losses.

After five weeks, Madden has the Vikings sitting at 3-2, which would be just one win shy of their real-life tally should Minnesota handle business on Sunday.