Week 3: Lions at Vikings, According to Madden Simulation 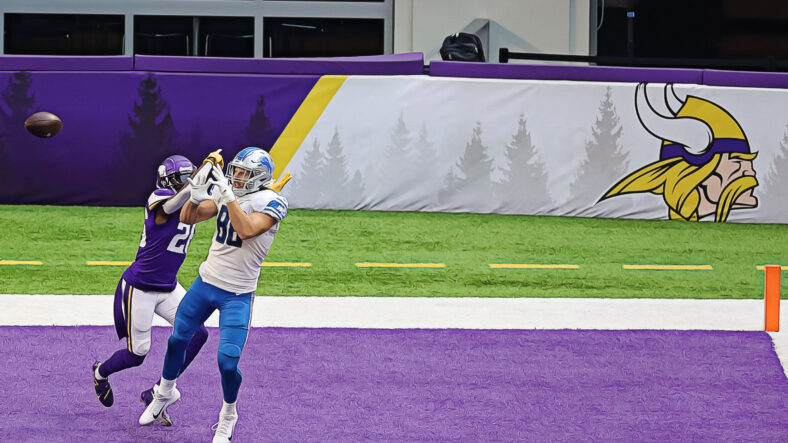 After a Monday Night drubbing in Week 2 against the Philadelphia Eagles, the Minnesota Vikings are back at home against the Detroit Lions for their Week 3 matchup. Minnesota is a six-point favorite, and this is how Madden 23 sees it playing out.

Minnesota needed to set the tone this week back at U.S. Bank Stadium. After allowing the Eagles to dictate gameflow a week ago, it was imperative that they controlled this one. Scoring first on an Alexander Mattison touchdown, they were able to accomplish just that.

Detroit then ripped off the following 21 straight points. It was a 7-7 game after the first quarter, and the Vikings found themselves trailing 21-14 at halftime. Jared Goff had thrown for a trio of touchdowns, and Minnesota again looked like another letdown week may be upon them.

Fortunately, Kevin O’Connell made key adjustments at halftime, and the Vikings forced overtime following a 10-3 advantage in the second half. During the final frame, Kirk Cousins found K.J. Osborn for the go-ahead score to give Minnesota a 30-24 victory.

The Vikings generated over 500 yards of total offense, with 340 coming through the air. A 29-8 first down advantage was beyond sizeable and spoke to how impressive it was that the Lions were able to hang in this one. The game’s lone turnover came from Cousins, an interception on a pass intended for Irv Smith Jr.

Dalvin Cook carried the rock 19 times for 73 yards while the Vikings defense stuffed D’Andre Swift for just 34 yards on 17 carries. Although he didn’t find paydirt, Justin Jefferson hauled in 10 passes for 111 yards, while Osborn recorded eight catches for 122 yards. Adam Thielen did have five receptions but tallied just 31 yards in the victory.

The only Vikings lineman to record a sack was Dalvin Tomlinson, although Za’Darius Smith did record two tackles for loss.

Madden has come out with a 2-1 prediction for the Vikings through the first three weeks of the 2022 NFL slate, and Minnesota winning on Sunday against Detroit would match that record in real life.