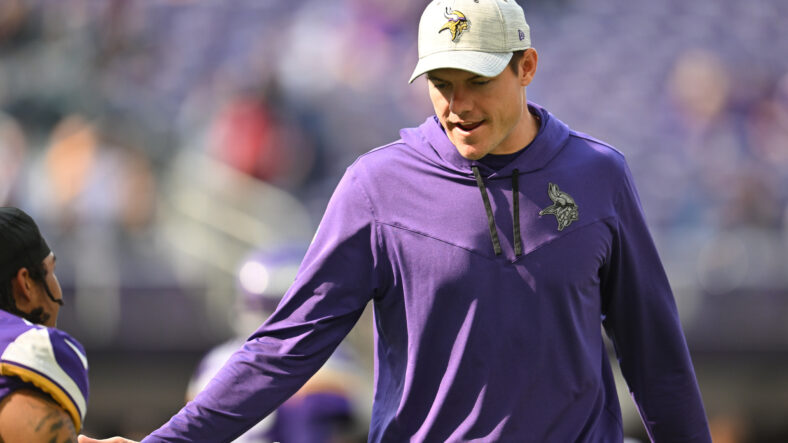 The Minnesota Vikings have led opponents for 45 seconds in the last two games. And after eking out a victory over the rival Detroit Lions in Week 3, head coach Kevin O’Connell delivered a fiery, no-holds-barred speech to his team.

O’Connell’s team overcame two deficits of 10 points or greater on Sunday, ultimately downing the Lions 28-24 thanks to a dagger touchdown pass from Kirk Cousins to wideout K.J. Osborn with the game on the line.

The Vikings defense then stiffened — finally — to close out the game as Minnesota trotted to a 2-1 record and lead atop the NFC North.

O’Connell realized the game wasn’t without flaws — the team has several areas to improve — but he was overly proud of the squad and told them about it after the game. He did not personally censor the speech for the cameras.

O’Connell said about winning, “It’s addicting, man — to come in here and see these looks on your faces, knowing you just earned that sh-t against a good football team that we’re going to play again.”

He continued, “We’re 2-0 in the division, and we’re 2-0 at home. But we just learned a whole f-cking a lot more about our team and our heart than that right there.”

The Vikings hired O’Connell in February to change the culture and promote infectious energy. With a 2-1 record to start the 2022 season, along with motivational moments like the video illustrates above, the 37-year-old is off to a promising start.

Minnesota travels across the ocean this week to London, taking on the New Orleans Saints in a road game for the Vikings and a home game for Jameis Winston’s team. The Saints are 1-2 and coming off an embarrassing loss to the Carolina Panthers.

The Vikings are early 2.5-points favorites in Week 4.