Vikings Youth to Be Tested Sunday 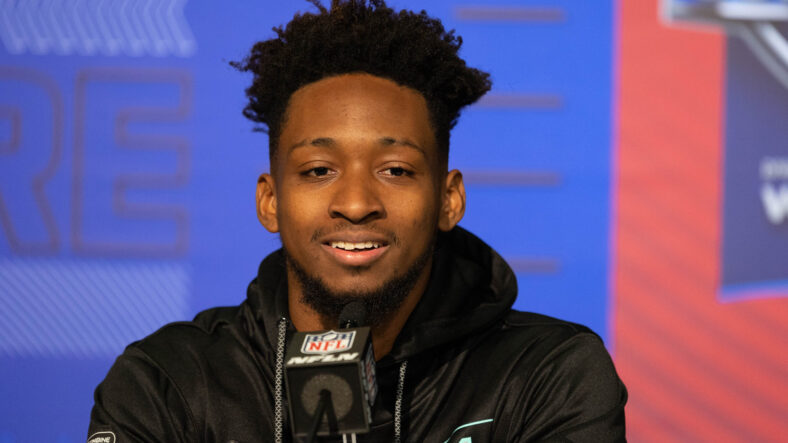 Going into the 2022 NFL Draft, one of the chief areas of focus had to be in the secondary. Mike Zimmer was once a defensive guru, but that side of the ball was abysmal last year, and the secondary was particularly an issue. Kwesi Adofo-Mensah addressed it in a few different ways, and now that youth will be tested.

Unfortunately, Minnesota lost first-round pick Lewis Cine to a gruesome injury during their game in London against the New Orleans Saints. He had yet to crack the starting lineup alongside All-Pro Harrison Smith, but there were undoubtedly strides being made by the big hitter out of Georgia.

Under Zimmer, the cornerback room was particularly troublesome. Not only did the former head ball coach routinely opt to play an awful Bashaud Breeland over Cam Dantzler, but the unit, as a whole, was routinely the culprit for big plays. Now heading into a matchup with Stefon Diggs and Gabriel Davis, it will be up to the youth to step up.

On Friday, Dantzler was officially ruled out for the game (alongside defensive tackle Dalvin Tomlinson). Patrick Peterson remains the veteran starter atop the depth chart, but draft picks Akayleb Evans and Andrew Booth Jr. now become equally important. Veteran Chandon Sullivan has struggled at times in 2022 since coming over from the Green Bay Packers, and it would be a long-term boost for Minnesota to see their youth rise to the occasion.

A week ago, Evans had a breakout game against the Washington Commanders. Fans were so elated with his performance, many were clamoring for the hometown Timberwolves to hook him up with courtside seats for a tilt this past week. Booth Jr. has contributed mainly on special teams to this point, but his role should grow immensely on Sunday.

No matter what Peterson does on his own, the Vikings don’t have a corner capable of shadowing a receiver as talented as Diggs. The former Vikings star comes in just ten receiving yards behind that of current Minnesota star Justin Jefferson. If Kevin O’Connell’s club wants to win this game, keeping him in check will be critical.

Regardless if it’s Josh Allen or Case Keenum under center, you can bet neither will avoid picking on the youngsters against their wideouts. It will be worth watching to see who rises to the occasion and potentially can cement a more substantial role as the season goes on.

Minnesota is only going to continue seeing more difficult opponents as the year trends into the playoffs, and having a secondary on the upswing is something that Ed Donatell certainly wants to see from his defense.