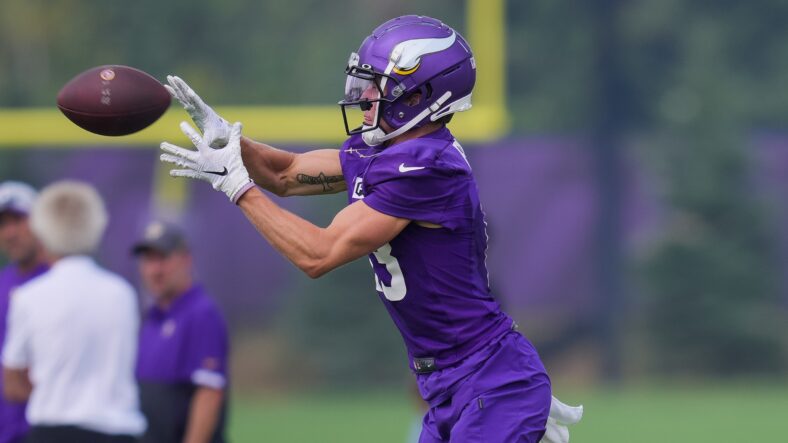 The Minnesota Vikings stand with a 5-1 record entering the bye week and are making some roster tweaks with the NFL’s trade deadline 12 days away.

General Manager Kwesi Adofo-Mensah added safety Myles Dorn back to the practice squad a few days after his waiver. And to make room for Dorn, the Vikings waived wideout Blake Proehl.

Minnesota also dropped safety Mike Brown from the practice squad, who’s had an off-and-on relationship with the Vikings roster for months.

Proehl, 23, can now be signed by an NFL team, and if he is not added to any franchise’s roster, he could revert to the Vikings practice squad at some point. Such is often the case when moves are made for the final roster spot.

The East Carolina alumnus, for now, is most famous for his bloodline. His father, Ricky Proehl, also a wide receiver, played for six NFL teams in 17 years from 1990 to 2006. Vikings fans tend to love sons of former players.

An undrafted discovery in 2021, Proehl has yet to play in a regular season game. He was injured before the 2021 regular season and did not play for the Vikings as a rookie. He’s known for speed — a 4.47 40-yard dash at the 2021 NFL Combine — and football lineage.

As a Pirate in college, Proehl grabbed 130 receptions for 1,576 yards and 9 touchdowns. The Vikings placed Proehl on the Physically Unable to Perform list in August and activated him a few days ago. But the activation was short-lived, as Prohel will either become a true-blue free agent or rejoin the team’s practice squad by the end of the week.

The Vikings defeated the Miami Dolphins last weekend and have a week off before hosting the Arizona Cardinals in Week 8.