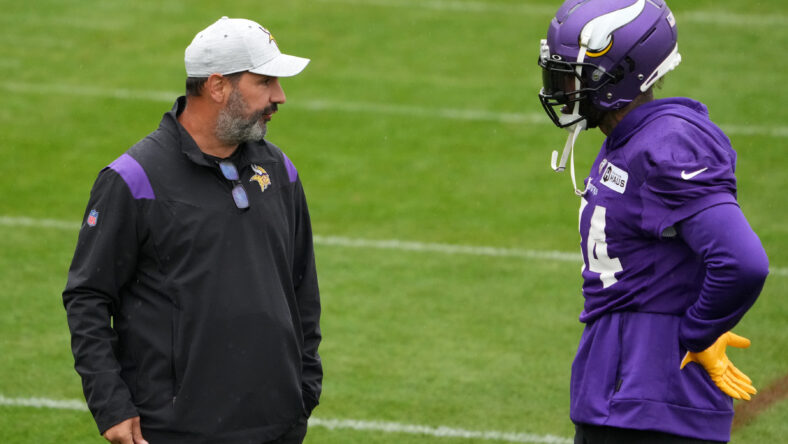 Fourth-year TE Irv Smith was injured Sunday as the Minnesota Vikings took down the Arizona Cardinals 34-26.

Smith was tentatively diagnosed with a high ankle sprain, an injury that generally sidelines an athlete for multiple weeks.

VikingsTerritory and numerous other websites addressed the Vikings need for an extra, semi-prominent tight end during the summer, but the Vikings front office and coaching staff were evidently content rolling with Smith, Johnny Mundt, and Ben Ellefson. Smith missed all of the 2021 season due to a torn meniscus, so folks surmised a contingency plan at tight end was wise.

Well, the time has arrived for that contingency plan.

In addition to Mundt, the current TE2, Minnesota also employs Jacob Hollister, who has starting experience with various NFL teams. He could experience more action in the coming weeks while Smith recovers.

Otherwise, the Vikings will experiment with rookie Nick Muse, a 7th-Rounder from the 2022 NFL Draft, trade for a tight end, or sign a free agent. For now, if the Vikings conduct no trades or TE free-agent signings, the plan would be Mundt and Hollister.

The aforementioned Ellefson is slated to return in a couple of weeks.

On the trade market, the Vikings could explore Mike Gesicki (Miami Dolphins), Foster Moreau (Las Vegas Raiders), Austin Hooper (Tennessee Titans), or Albert Okwuegbunam (Denver Broncos). All four have been whispered in the trade rumor mill, and the Vikings could likely land one for a low-round draft pick.

On the free-agent market, Eric Ebron, Jimmy Graham, and Jared Cook, among others, are available. Lesser-known TEs are on the market, too, but none are much more of an upgrade to the Vikings current Mundt-Hollister combo.

Minnesota has also reportedly inquired about Kyle Rudolph, who spent 10 years with the franchise from 2011 to 2020. But Rudolph is an active member of the Tampa Bay Buccaneers, and it’s unclear if he’d be available.

Smith’s injury is adverse news for the 24-year-old as 2022 is the final year of his contract.

If the Vikings plan to trade for a tight end, they have less than 24 hours to pull the trigger. The NFL trade deadline is Tuesday at 4:00 pm EST.