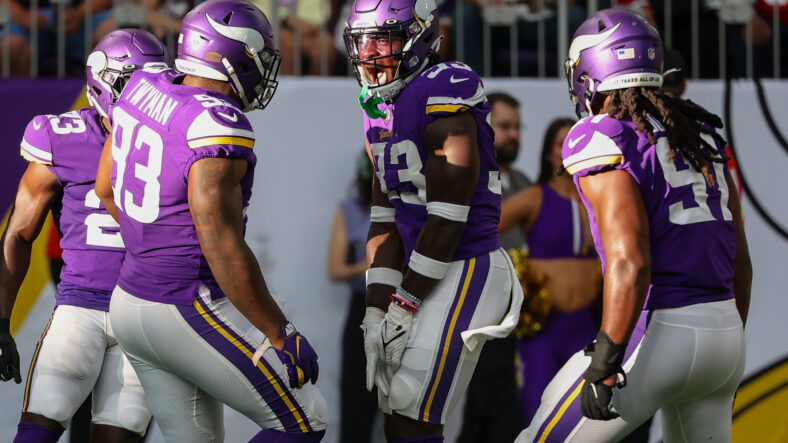 Ed Ingram is the only Minnesota Vikings rookie to play significant snaps through five games of 2022, but another man is poised to see more action.

Linebacker Brian Asamoah will experience more defensive snaps as the Vikings attempt to win the NFC North for the first time since 2017. Minnesota’s general manager Kwesi Adofo-Mensah found Asamoah in the 3rd Round of the 2022 NFL Draft, and now is apparently the time to begin his formal insertion inside Ed Donatell’s 3-4 defense.

Before Week 5, when the Vikings knocked off the rival Chicago Bears 29-22, Asamoah had only played special teams, tallying 81 snaps in four weeks. Yet, against Chicago, the Vikings introduced the 22-year-old to the defensive side of operations, using the Oklahoma alumnus on six snaps.

And that was the tip of the iceberg, according to Vikings head coach Kevin O’Connell.

O’Connell told reporters about Asamoah on Thursday, “We’ve got E.K. (Eric Kendricks) and Jordan [Hicks] who have played really well, but we want to be able to mix Brian in there. It’s a long season.”

The comments totally check out, as after Kendricks and Hicks on the Vikings linebacker depth chart, only Asamoah and Troy Dye exist. In fact, if Kendricks or Hicks were injured in 2022, Asamoah would be the next man up for duty.

During April’s draft, Minnesota operated with defense on the brain, but so far, haven’t used much of the spoils from the event. The Vikings didn’t immediately insert Lewis Cine into the starting lineup, and he regrettably broke his leg in London. He’ll miss the rest of his rookie season. Then, rookie cornerback Andrew Booth hasn’t played on defense either, injuring his quad on special teams during a Week 1 win over the Green Bay Packers.

That leaves corner Akayleb Evans whose 32 defensive snaps lead all Vikings rookies on defense, a small number for a draft that preached defense, defense, and more defense.

Asamoah signed a four-year, $5.49 million deal with a signing bonus of $1.17 million in early June, fastening him to the Vikings depth chart until the end of the 2025 season. He’s a gridiron specimen noted for “freakish” tendencies. He ran a 4.56-second 40-yard dash in the lead-up to the draft and was theorized by some as a 2nd-Round pick. Asamoah participated in 37 games after redshirting in 2018 but started 19 games in 2020 and 2021 for the Sooners.

His family originated in Ghana, the same country of which Vikings general manager Kwesi Adofo-Mensah has lineage.

Asamoah’s 40-yard dash time of 4.56 seconds was the same time recorded by New Orleans Saints running back Alvin Kamara during his draft lead-up.

Back in June, ESPN labeled Asamoah a ‘summer standout,’ as Kevin Seifert wrote about the linebacker, “Asamoah’s sideline-to-sideline speed was plainly evident in non-contact practices, as was his confidence. He joked with an assistant coach that he wanted $5 every time he ran past someone.”

The Vikings take on the Dolphins in Miami this weekend, owners of a 3.5-point spread. Minnesota’s defense ranks 28th in the NFL per DVOA despite a 4-1 record.

Asamoah was teammates with Jalen Hurts, CeeDee Lamb, and Creed Humphrey at Oklahoma.