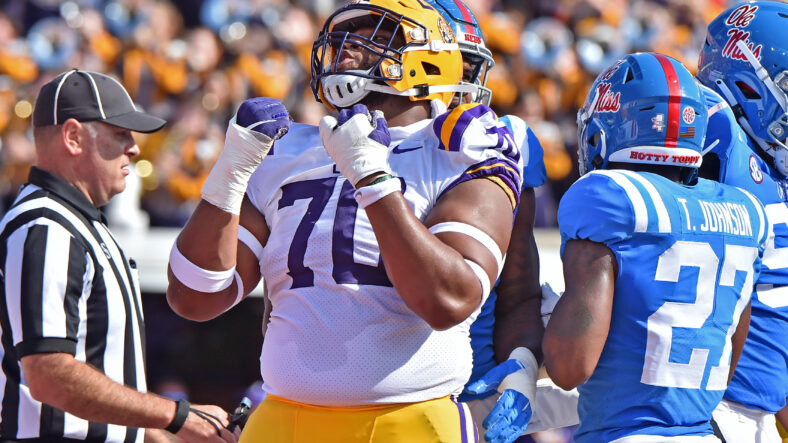 The big talking point in training camp every year is if rookies are getting first-team reps. Ed Ingram received reps with the starters over Jesse Davis for the first time. The Vikings rookie comes closer to his goal to open the season with a starting job.

Ingram already worked with the first team a few times, but Davis got a ‘veterans rest day’ and wasn’t practicing. On Wednesday, however, Davis took reps with the second team while Ingram worked at right guard with the starters between Bradbury and O’Neill.

The recent buzz out of training camp suggested that Davis is doing alright. He hasn’t done anything head-turning but hasn’t been a disaster either. The same is true for Ingram. However, the team apparently wanted to give their rookie more opportunities.

One of the two competitors is replacing Oli Udoh, the 2021 starter. Udoh was responsible for 16 penalties, an unacceptable league-high number. The Vikings didn’t hesitate and added three possible replacements. Chris Reed and Jesse Davis were the two veteran free agent signings. Reed is getting reps with the second team as the center, as the team might want him to become backup for the struggling Bradbury.

Davis came from the Dolphins, where he played tackle in recent years but also has plenty of guard experience. He started 30 games for the Dolphins as the right guard. Davis is better suited to be a guard. The Vikings didn’t stop there and drafted Ed Ingram in the draft’s second round. Ingram played at LSU since 2017 and earned PFF’s best pass blocking grades in the SEC. In the 2019 season, he blocked for Joe Burrow in an offense that also featured Justin Jefferson.

Unlike Davis, he has the power, explosiveness, and some nastiness to be a dominant guard, while Davis’ ceiling is that of an average player. Ingram definitely has a higher ceiling, while Davis has a higher floor at the moment as a veteran.

Earlier in the week, Vikings offensive coordinator Wes Philips talked about his rookie lineman who can potentially earn a starting role, “All we’ve seen with Ed is him continuing to improve every day, to understand the techniques that we’re asking him to do. He’s very stout. He’s got a great anchor. Late in the rush when he gets on an edge, he’s athletic enough to get his feet on the ground and push guys out of the pocket, create some expansion in the pocket. We’re really pleased with where he’s at. He’s just getting better every day.”

He earned high praise because of his physical abilities paired with a lot of experience from his college days, and he apparently has the necessary awareness and takes coaching very well.

Ingram talked about the first team reps, “It’s cool. I like to hang out with the guys. It’s fun to get in there with the older guys. It definitely ups the intensity. That’s what football is about. It’s intense, so I’m ready for it.”

More intensity playing with the first team is expected, and it’s how it should be. Asked about his performance, Ingram said, “I feel like it went pretty well. It went well. It wasn’t a surprise. I was expecting it. I’m trying to work and see what I can do with the 1s and the 2s.”

Ingram isn’t satisfied, as he intends to keep working and trying to earn a spot on the field:

He possesses a great mindset, as he’s trying to keep his head down, work as hard as possible, and doesn’t think about things he can’t control. It was the first step to usurping the starter Jesse Davis. In the first unofficial depth chart, Davis is still the starter. However, the season opener is still more than four weeks away. The Packers will come to town in Week 1, and Ingram has a chance to start against Kenny Clark and fellow draft selection Devonte Wyatt.

The rookie doesn’t suddenly become a lock to earn the starting job for the Vikings Week 1 matchup, as Ingram has to continue to convince the coaches to give him the gig. The Vikings will have a couple of training sessions before they play the Raiders in Las Vegas on Sunday. That’s another big day for Ingram. He has to showcase his skills against real competition in a real game.