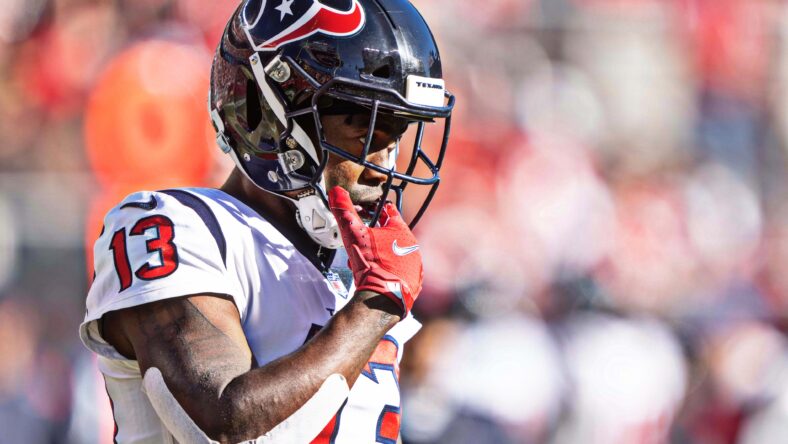 The Minnesota Vikings employ Justin Jefferson, Adam Thielen, K.J. Osborn, Jalen Reagor, and Jalen Nailor at WR, but they may want to get richer.

The NFL’s trade deadline looms just five days away, and Minnesota’s general manager Kwesi Adofo-Mensah has already displayed a profound affinity for trades with nine months on the job.

Particularly, the Vikings may have eyes on a big-name wide receiver from the Houston Texans named Brandin Cooks.

Speaking on a SKOR North YouTube show, KSTP’s Darren Wolfson dropped some intel on the Vikings fascination with adding another wideout, “I’ve heard that they’ve spoken with the Denver Broncos, the Washington Commanders, the Houston Texans.”

Wolfson continued, “They seem to be on the lookout for a receiving target that can stretch the field, whether that be a K.J. Hamler or a Brandin Cooks.”

Hamler is the Broncos WR3 and not established like Cooks. However, if the Broncos lose in London this weekend to the Jacksonville Jaguars, sinking their record to a mind-boggling 2-6, Denver may conduct a fire sale.

Cooks, on the other hand, is no stranger to bouncing around the NFL. He’s played for the New Orleans Saints, New England Patriots, Los Angeles Rams, and Texans. In that vein, Cooks is a mercenary for production whose resume never receives Pro Bowl attention.

And since entering the NFL in 2014 as a 1st-Round pick, Cooks ranks seventh in NFL for receiving yards and 12th in receiving touchdowns. All the man does is catch footballs and stuff statsheets. Fantasy football managers can attest.

Cooks has also authored six 1,000+ yard seasons in eight full seasons, so the man is consistent. Those six seasons with 1,000+ receiving yards are second in the NFL since 2014 behind Mike Evans.

For Adofo-Mensah to pull the trigger on Cooks — or Hamler — the asking price must be low. The Vikings have already traded 4th, 6th, and 7th-Round picks from the 2023 NFL Draft. Minnesota’s bossman would have to donate the 5th-Rounder to Houston for Cooks — or dip in the 2024 draft capital basket.

Adofo-Mensah has pulled off 10 trades since taking the general manager job in January. He’s fond of the process. The Vikings rank 17th in passing DVOA through seven weeks, and Cooks would presumably help enhance that mark.

The Vikings and Texans already executed a trade this year, swapping a 6th-Rounder to Houston for DT Ross Blacklock and a 7th-Rounder.