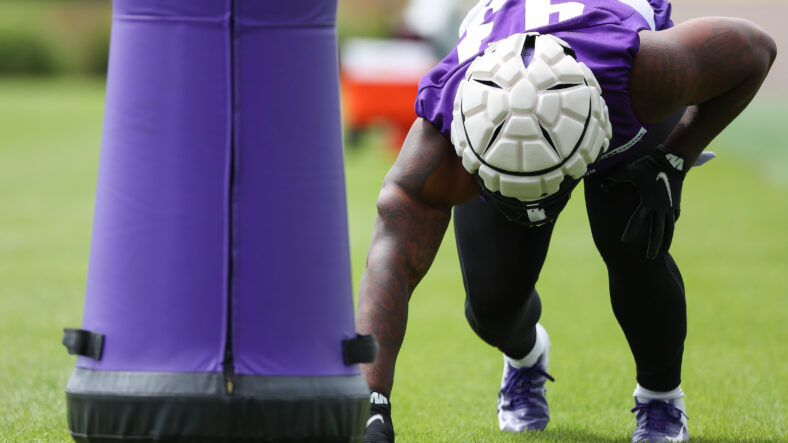 As the Minnesota Vikings placed rookie Lewis Cine on injured reserve and signed nose tackle Khyiris Tonga from the Atlanta Falcons on Tuesday, one man was quietly the odd man out.

It is unclear if Twyman, 23, will return to the practice squad in the future.

Chosen in the 6th Round of the 2021 NFL Draft by ex-general manager Rick Spielman, Twyman was a fan-favorite because of low draft cost and high potential. His story is also remarkable, recovering from multiple gunshot wounds in the summer of 2021, just months after the Vikings found Twyman in the draft. But the Pittsburgh alumnus didn’t make the 53-man roster in August and jaunted to the practice squad.

There, he lasted a little over a month and will now hope to latch onto a new team or potentially rejoin the Vikings down the road. Twyman was a fashionable pick by many to make the Vikings 53-man roster in 2022. ESPN even listed Twyman as a starter on the website’s depth chart from April to August.

Making a name for himself for sheer strength, Twyman repped 225 pounds on the bench press 40 times at the Unversity of Pittsburgh’s Pro Day in 2021 — which is Aaron Donald-like strength (who is also a Pittsburgh alumnus). Twyman seemed like a somewhat reasonable bet throughout the summer to make the Vikings regular season roster. New defensive coordinator Ed Donatell spoke positively about the defensive lineman when asked about Twyman’s play against in the first preseason game, “I thought really well when you think about a guy going two years without playing football.”

Donatell added, “You have to give this guy an A-plus.”

But his emergence will have to wait.

Twyman’s comeback has been lauded for the last year. According to Twyman’s agent, Drew Rosenhaus, the comeback is the stuff of fables. Rosenhaus told the Pioneer Press’ Chris Tomasson in August, “I’ve been an agent for 35 years, and this is one of the greatest comebacks I’ve ever seen.”

After his 2019 campaign at Pittsburgh, Twyman was on a trajectory to be selected early in an NFL draft. He tallied 10.5 sacks in 13 games as an interior lineman during his sophomore campaign. Then, Twyman opted out of the 2020 season due to COVID, and his draft stock never recovered.

The Vikings also released wide receiver Travis Toivonen along with the Twyman transaction.