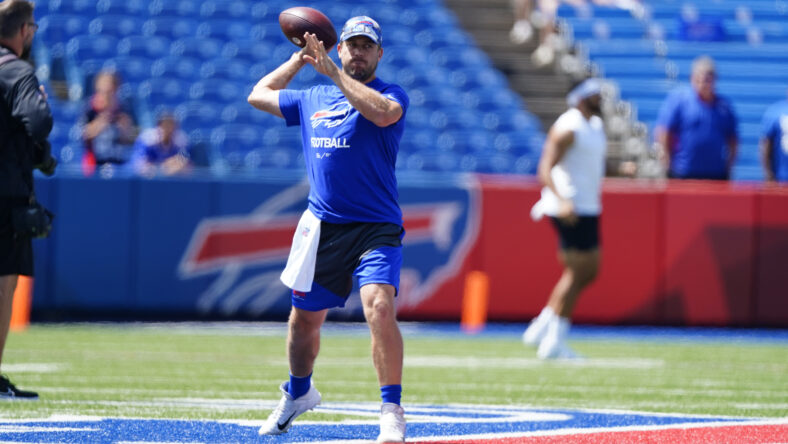 Remember when the Minnesota Vikings were going through uncertainty at the quarterback position, and a career backup emerged as one of the best quarterbacks on the planet, even if for a moment? Well, he could be starting against them on Sunday as a member of the Buffalo Bills.

Case Keenum is currently in his 10th year as an NFL quarterback, and he’s played in 78 games, compiling 64 starts. The Buffalo Bills are his 8th different team, and he’s never been with any team for more than two consecutive seasons. It’s not a glorious career trajectory by any means, and he’s never been in position to earn the mega deal, but the heights of his career will never be topped by a fleeting moment in 2017 with the Vikings.

Mike Zimmer was going to rely on Sam Bradford to be his quarterback in 2017, but that plan went awry after the first week, and it never recovered. Needing to be better than the 8-8 record Minnesota posted the year prior, it was going to be on Keenum’s shoulders to lead the offense. The gameplan was never for a career backup to do the heavy lifting, and essentially, he didn’t. A game manager, Keenum threw for just over 3,500 yards with 22 touchdowns across his 15 games of action.

It was enough for the Vikings to keep winning, however.

Keenum led the 2017 Vikings to an 11-3 record in his starts, and they went on to win 13 games overall. Faced with a battle at U.S. Bank Stadium against the New Orleans Saints for his first playoff action, it was there that Keenum needed his moment. Trailing with just seconds to go, every football fan on the planet knows what happened next. Keenum dropped back and connected with Stefon Diggs, who then raced to the end zone following the Saints whiff of a tackle. In that moment, there was no better quarterback in the history of the Minnesota Vikings or maybe even the NFL.

Obviously, Keenum’s career since has not lived up to that moment. He started a full season for a bad Denver Broncos team, then became a backup for the Washington Football Team. There, he faced Minnesota for the first time since leaving, and he wound up dropping that contest 19-9. A two-year stint in Cleveland under familiar coach Kevin Stefanski generated only nine games of action and two starts.

Now potentially forced into action should Josh Allen’s injury keep him out of Sunday’s contest, Keenum will get another chance against The Purple. He will look to get on the winning side of the battle this time and is undoubtedly armed with a much better squad.

Minnesota fans will always have a soft spot for Keenum, and he, too, has to know that was the pinnacle of what is to come for him. Still, downing them with a Bills team that has another chance to give him a Super Bowl ring would certainly feel great.

Case Keenum is not the Josh Allen Minnesota was expected to face, but he may have been better, if even for just a moment.