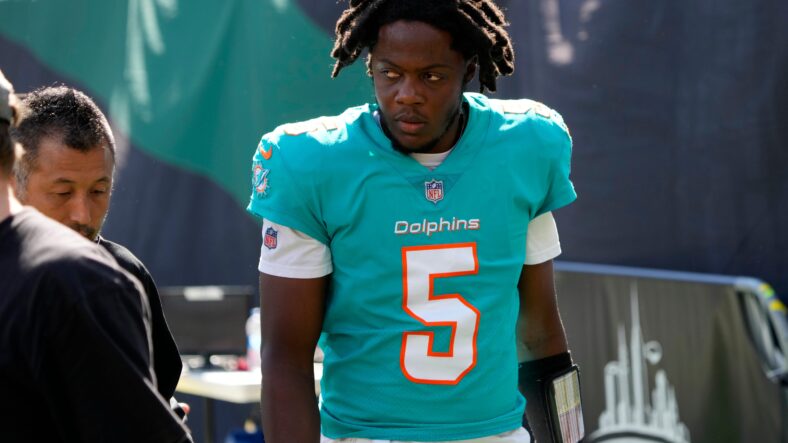 When the Minnesota Vikings travel south for a date with the Miami Dolphins in Week 6, a diminished opponent may be waiting, mainly because of quarterback injuries.

The Vikings outlasted the Chicago Bears in Week 5, 29-22, after letting an 18-point lead slip away but finishing Chicago off late. The Dolphins, without QB1 Tua Tagovailoa, were smoked by the upstart New York Jets 40-17 at MetLife Stadium.

Accordingly, the Vikings are three-point favorites to beat the Dolphins, a point spread that would’ve sounded laughable three weeks ago. Back in September, Miami roared out of the gate to a 3-0 start and seemed like the fashionable “next big thing” to contend in the AFC.

But Tagovailoa was injured in Week 3 in a win over the Buffalo Bills as his head slammed into the ground, creating controversy lasting weeks. Tagovailoa was allowed to play four days later at the Cincinnati Bengals, and his head was again driven into the grass, this time resulting in more head trauma and a scary scene.

The hits set off a shockwave of concussion awareness, leaving Tagovailoa’s return timetable totally up in the air. Josh Moser from WSVN in South Florida tweeted on Monday about Tagovailoa heading into Week 6, “Tua is not to the ‘football activities’ part of protocol. He’s at best in stage 2 of the 5-step process and most likely will be out for #Vikings and beyond that.”

So, next up is Tedd Bridgewater, a Vikings alumnus, right? Not so fast. Bridgewater is indeed the Dolphins QB2, but his head was banged against the turf in Week 5. It never ends for Miami.

Perhaps one month ago, Miami could’ve wiggled Bridgewater back into the starting lineup “this soon,” but this is the same team that tried that with Tagovailoa less than two weeks ago. Miami must be more cautious, and Bridgewater may be an inactive casualty in adhering to the new rules implemented by the NFL and NFLPA.

Thompson was a 7th-Round draft pick from Kansas State in April, and in relief of Bridgewater versus the Jets, Thompson looked like — you guessed it — a 7th-Rounder. He fired up a 29.2 QBR in Week 5 in an anemic showing against New York. Such is typically the case for late-round rookie quarterbacks in their first NFL showings.

Ergo, that’s the mystery. Nobody knows who will play QB1 for Miami. It probably won’t be Tagovailoa. Bridgewater might be bad optics to trot on the field this Sunday. Although it should be noted, he could still play if he suffered no concussion.

And if it’s neither Tagovailoa nor Bridgewater, the Vikings would experience the diet Dolphins, led by Skylar Thompson.