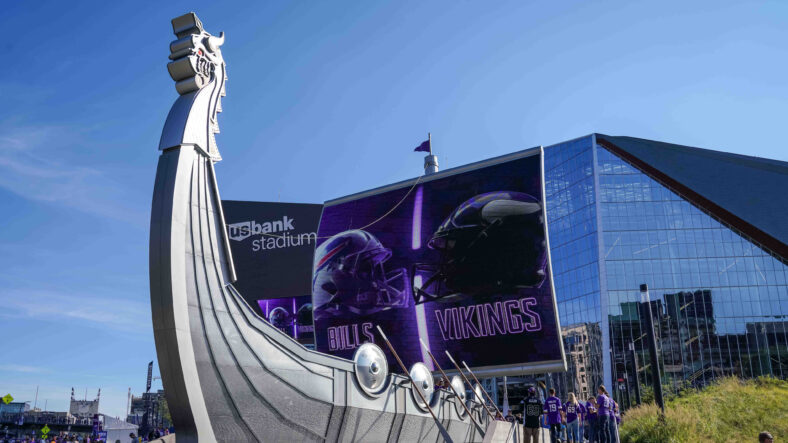 The Minnesota Vikings conducted two practices in Eagan on Wednesday and Thursday, now setting sail on their home stadium for Friday’s excursion.

The practice is closed to fans, but Saturday’s event in Eagan is open to the public (for a fee). And at the big house, U.S. Bank Stadium, Vikings new head coach Kevin O’Connell plans to “get a dry run on logistics, headsets, and other details,” according to ESPN’s Kevin Seifert.

Minnesota’s rookies reported to training camp last weekend, while all other players arrived on Tuesday. On-the-field action commenced on Wednesday and didn’t disappoint.

O’Connell, a first-year skipper, has carried over his infectious enthusiasm to the actual field, proving his words at press conferences over the last five months are actionable. A Mic’d Up video told the story earlier this week.

Several personnel developments have arisen, too. Andrew Booth, a 2nd-Round rookie from Clemson vying for a starting cornerback job, looks like the real deal, impressing teammates with stellar play and a scrappy attitude.

At quarterback, Kirk Cousins is the sure-fire QB1, but Kellen Mond and Sean Mannion are dueling for the QB2 job. Both men are taking turns at QB2 early in camp, ensuring a battle for the job. Last year, Mannion was anointed QB2 even though Mond appeared to have a brighter upside.

Minnesota is lacking at TE2 — at least that was the case before training camp — but free-agent addition Johnny Mundt has “looked the part” out of the gate as a viable TE2. Mundt is a Los Angeles Rams carryover for O’Connell, who led the Rams Super-Bowl-winning offense in February.

Jesse Davis, an offensive tackle from the Miami Dolphins who joined the Vikings in free agency, is the frontrunner at right guard. Meanwhile, general manager Kwesi Adofo-Mensah added two guards in Ed Ingram and Chris Reed this offseason, both of whom wouldn’t need a tackle-to-guard conversion. Davis is the favorite to win the job, but that’s only through two days of camp.

Unsurprisingly, Danielle Hunter shined on Day 2 of camp, confirming his shift into a 3-4 defense should be seamless. Folks really didn’t fear the transition in the first place.

Free-agent signee Jordan Hicks has missed camp so far, battling some sort of illness. In his stead, Troy Dye has filled in — a notable occurrence as most would surmise rookie Brian Asamoah as the substitute. No cigar yet for the rookie Oklahoma linebacker.

And, of course, the controversies and oddities:

Vikings training camp really heats up on Monday when players put on the pads for the first time.