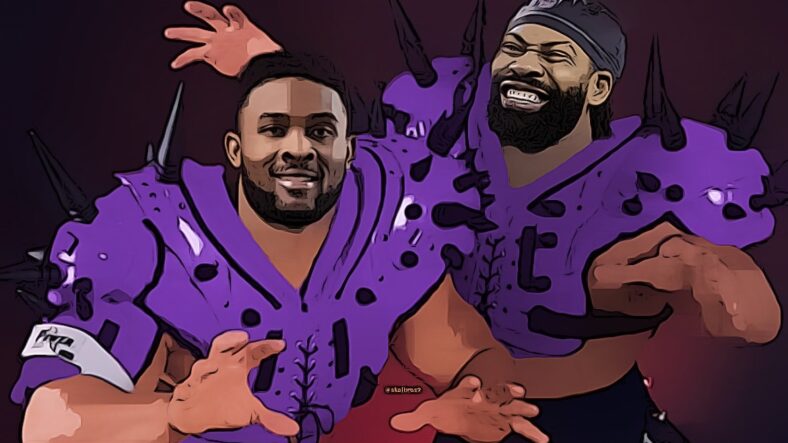 Emulating an old phrase from the Purple People Eater days of Minnesota Vikings football, Za’Darius Smith and Danielle Hunter plan to “meet at the quarterback” in 2022.

Hunter was drafted by the Vikings in 2015, a fabulous 3rd-Round discovery by former general manager Rick Spielman. New general manager Kwesi Adofo-Mensah found Smith in free agency a few months ago, luring the EDGE rusher away from his old team, the Green Bay Packers, and other suitor teams like the Baltimore Ravens.

And if the EA Sports video game Madden is a reasonable indicator — sometimes it is; sometimes not — Minnesota will be in good shape on the edges of its defensive line. Smith and Hunter placed in the Top 20 for Madden‘s EDGE rusher rankings, released on Tuesday after wide receiver scores dropped on Monday.

Hunter was the top dog for the Vikings, netting an 88 score from Madden makers. The mark ranked 11th in the league among EDGE rushers. Smith was two points lower at 86, placing him at #17. Myles Garrett topped the NFL with an unbeatable 99 rating.

Smith and Hunter hope to incede toward the 2022 season with rejuvenation and a clean bill of health. The men have missed 64% of all football games since the start of the 2020 season. A back injury ailed Smith in 2021, and Hunter succumbed to a neck malady in 2020, plus a torn pectoral muscle last season. While the two formulate a gruesome twosome undoubtedly for opposing quarterbacks, the Vikings absolutely must have both men relatively upright for the 2022 campaign.

Why? Well, after Smith and Hunter, the EDGE rushers include Patrick Jones II, D.J. Wonnum, Janarius Robinson, Andre Mintze, Luiji Vilain, and Zach McCloud. No clear-cut choice among those names is evident if something happens to Smith or Hunter this season.

Overall, the Madden rankings aren’t too surprising, at least per the Top 20. Green Bay Packers defender Rashan Gary was afforded the utmost respect. Chase Young, like Smith and Hunter, was seemingly penalized for injury. Too, at a 92 rating, Von Miller and Khalil Mack are still awarded ample kudos.

If the Vikings still want to bolster EDGE depth before or during the 2022 season, prominent free agents like Jason Pierre-Paul, Carl Nassib, Ryan Kerrigan, and Everson Griffen are available. Otherwise, Minnesota crosses fingers on the Smith-Hunter experiment while holding high hopes for men like Jones II and Wonnum to ascend as developmental players.

Despite no Hunter or Griffen for most of the second half of the 2021 season, the Vikings still finished second in the NFL in sacks. Only the Pittsburgh Steelers registered more.

More Madden rankings are expected to hit this week.