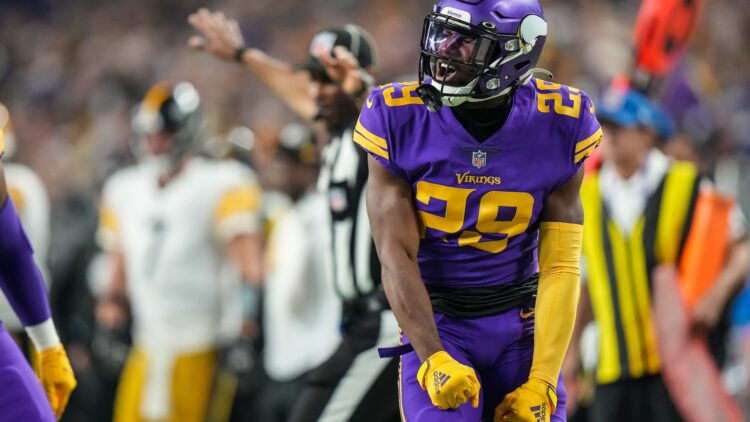 Next Tuesday, the NFL’s trade deadline will arrive. As a result, there has been all kinds of speculation about what could occur with the Vikings. A recent piece on The Athletic names a Vikings corner as a trade possibility.

According to Alec Lewis, we should be keeping an eye on Kris Boyd. Take a look at Lewis’ rationale:

Boyd has been a key contributor to the Vikings’ special teams unit. Minnesota may not want to part with that type of impact. But if it is seeking an upgrade at any position, secondary would make sense. This year’s second-round pick Andrew Booth Jr. is now healthy, but the Vikings have not talked about him as playing impactful snaps in the secondary in the short term. Chandon Sullivan has manned the cornerback position in the slot. His PFF grade (42.2) reflects the difficulty he’s had, especially against elite receivers. The Vikings’ depth and potential need could make Boyd a trade candidate, especially if the Vikings package it with a draft pick.

Now, I’ll admit that I don’t foresee a deal involving Boyd. As Lewis suggests, Boyd is an excellent player on special teams. For this reason, I think Kwesi Adofo-Mensah will be hesitant to let him go. It’s also worth noting that Boyd is a physical tackler, making him an intriguing depth option on defense.

Adding someone to help in the slot – again, as Lewis suggests – makes an awful lot of sense. Patrick Peterson has been playing well. He was really disruptive in the Miami game. Meanwhile, Cameron Dantzler has continued to show that he’s growing. Chandon Sullivan is the one who has struggled the most.

I’ve speculated that Minnesota might give Houston a call. My thinking is simply that the Texans aren’t going to compete in 2022 and they have plenty of players on short-term, modest deals. One such player is Desmond King II, a slot corner who currently has the 14th-best score among corners on PFF. Perhaps the Vikings will see about putting together a trade for the talented Texan.

Minnesota doesn’t have a ton of draft picks, but there are some options available to them. Perhaps a 5th would be enough for the Texans to trade away their slot corner.

If a team did call about Boyd, Adofo-Mensah would likely get a late-round pick in return. According to Over the Cap, Boyd has a cap hit that comes in a touch under $1 million in 2022. Next year, he’ll be a free agent.

For the most part, Boyd has been a backup in Minnesota. He was a 7th-round selection back in 2019, so finding a way to stick around the roster for the entirety of his rookie deal is impressive. 7th-round selections are guaranteed very little in the NFL. In 2020, he started 5 games, and in 2021 he started 1. Otherwise, he has been a depth defender who does a nice job on special teams.

One has to think that Adofo-Mensah is considering the different possibilities that arise at this time of the year. Pulling off a trade for a corner might help the Vikings, but I’m skeptical that sending out Boyd is a move the team should do.