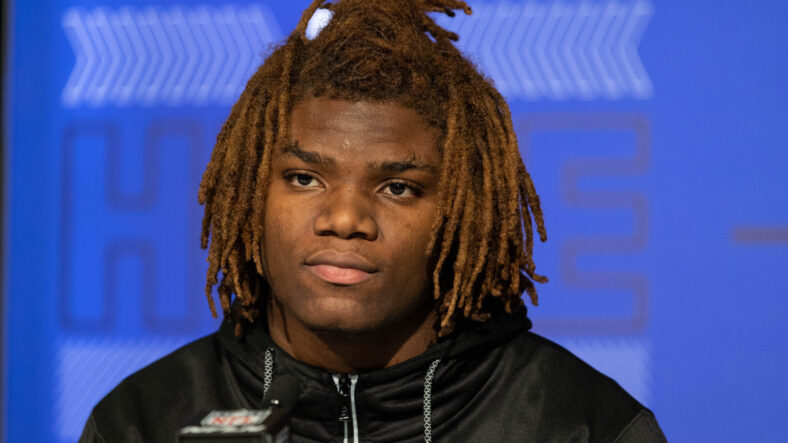 The Minnesota Vikings traveled to England for Week 4 showdown with the New Orleans Saints, but an injury stole headlines early in the game.

On a special teams play, Vikings 1st-Round rookie Lewis Cine was hurt with an injury described as “gruesome” by ESPN.

Minnesota drafted Cine in April after a controversial trade with the Detroit Lions that netted the divisional foe wide receiver Jameson Williams and EDGE rusher Josh Paschal. Cine is the Vikings plan for life after Harrison Smith.

Cine was considered the “next big thing” for the Vikings defense early in the summer. But when training camp and the preseason arrived, Cine curiously slid down the team’s depth chart. And when Week 1 hit, Cine didn’t play because of reaggravation to an existing knee injury.

And now, a leg injury may hamper Cine’s rookie campaign once again.

Second-year safety Camryn Bynum retained a starting job at free safety while Cine bided his time for a chance at defensive playing time. Meanwhile, starting strong safety Harrison Smith was injured with a concussion and didn’t play in Week 3. The Vikings claimed Cine would see his NFL debut on defense, but the rookie safety was relegated to special teams-duty-only versus the Detroit Lions. Cine posted this to Twitter after the Vikings win accordingly:

Immediately after the injury in London, Cine was treated with an air cast for the leg injury and taken to a local hospital. ESPN’s Kevin Seifert tweeted about the situation, “I didn’t see a replay of Lewis Cine’s injury on TV here in Minnesota, but Katherine Terrell [who covers the Saints for ESPN] who is in London, saw it there and said it was “gruesome.”

The Vikings lead 13-7 at halftime, and more information will be available about Cine’s injury after the game.