The Vikings Top Offensive Performers at Dolphins, per PFF 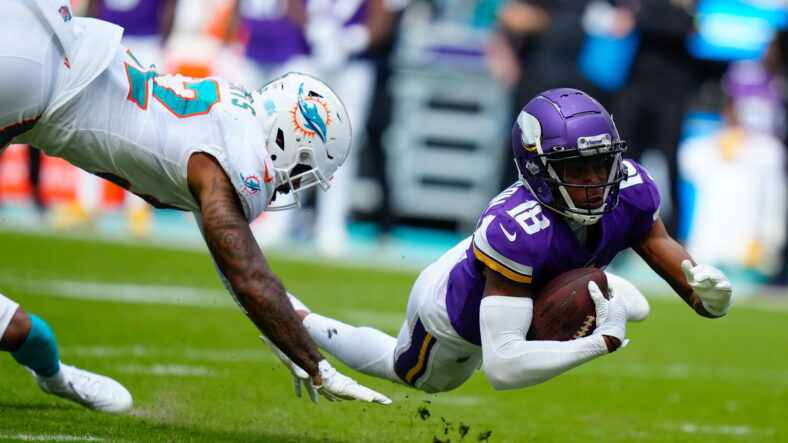 The Minnesota Vikings topped the Miami Dolphins in Week 6, 24-16, in a game where ex-Viking Teddy Bridgewater tried to exact some revenge on his old team but failed.

Minnesota’s offense played poorly for much of the 1st Half — and almost all of the 3rd Quarter — but did just enough not to fully disappoint. The Vikings defense played its best game of 2022, putting pressure on the aforementioned Bridgewater all day.

Ultimately, the Vikings survived the Dolphins, etching a record of 5-1 through six weeks, now sitting alone at the top because the Green Bay Packers have lost in back-to-back weeks to the New York Giants and New York Jets. Aye caramba.

Justin Jefferson and Adam Thielen didn’t outwardly produce monster days, but their showings were evidently enough for PFF to lead the pack. Jefferson tallied 6 receptions for 107 yards and no touchdowns during a game that felt “quiet” by his herculean standards. Still, Jefferson chipped off a 47-yard gain late in the 3rd Quarter with the game on the line.

Brian O’Neill was the only member of the offensive line who actually looked good. Minnesota offensive trenches endured their worst outing of the year to date. Each player besides O’Neill graded below 60.0 per PFF — not ideal.

Kirk Cousins was the person besieged because of the OL tomfoolery, but he helped the Vikings find a way to win nevertheless. This has been the drill for Cousins and Minnesota all season — hence the 5-1 record. Cousins completed 20 passes on 30 tries for 175 yards and 2 paydirts. Not bad.

The Vikings travel home in two weeks for a date with the embattled Arizona Cardinals. Arizona’s head coach Kliff Kingsbury is firmly entering hot-seat territory as the Cardinals have a 2-4 record.