The Vikings Top Offensive Performers at Bills, per PFF 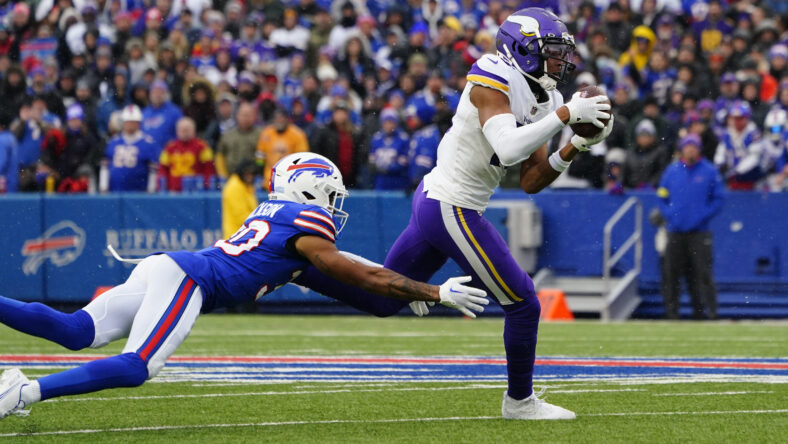 The Vikings topped the Bills in Week 10, 33-30, in an inexplicable game featuring a 17-point 2nd Half comeback by Kevin O’Connell’s team.

Buffalo took control of the game in the 2nd and 3rd Quarters after a nifty start by the Vikings. But Minnesota roared back as the 3rd Quarter wound down and seized the 4th and overtime periods.

Ultimately, the Vikings beat the Bills, etching a record of 8-1 through 10 weeks, sitting alone at the top of the NFC North because the Green Bay Packers have lost five of their last six games. Green bay did, however, down the Dallas Cowboys in Week 10.

Ezra Cleveland, Brian O’Neill, and Garrett Bradbury were absolutely vital in stifling the Bills ferocious pass rush, a tactic that wasn’t particularly utilized in Week 9 at Washington. O’Neill performed well against the Commanders — he always does — but Cleveland encountered his worst game as a pro. Among several game-deciding plays, the Vikings pass protection enabled the game to remain competitive when all hope was mostly lost down 27-10.

Christian Darrisaw only played 44 snaps, leaving the game prematurely because of the NFL’s concussion protocol. But his mammoth and immediate leap to stardom continues after the Vikings failed to nail down the LT position since the departure of Bryant McKinnie — over a decade ago. Darrisaw is the real deal.

Justin Jefferson became a verifiable household name at Buffalo. Even your aunt who doesn’t watch football now knows the name Justin Jefferson. His Jordanesque receptions from a clutch standpoint solidified the 23-year-old as the NFL’s best wide receiver, although some Miami Dolphins fans may disagree. His 4th-and-18 game-prolonging catch will live in the annals of Vikings history forever.

The Vikings travel home for a date with the Cowboys this weekend. Dallas lost in Week 10 to the aforementioned Packers. Dallas is undefeated at U.S. Bank Stadium, defeating the Vikings three times since the building opened in 2016. 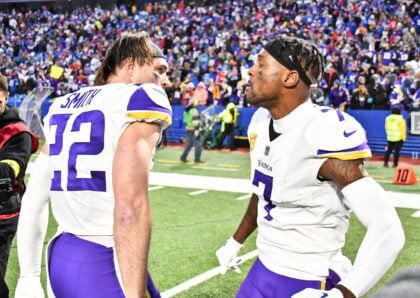