The Vikings Top Defensive Performers at Saints, per PFF 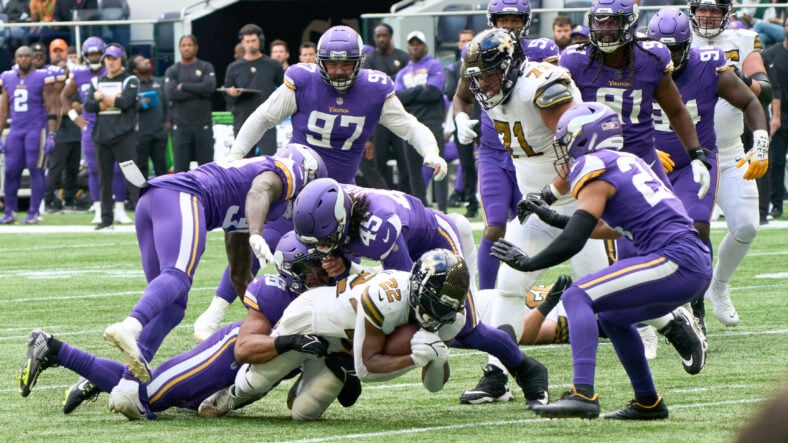 The Minnesota Vikings topped the New Orleans Saints in Week 4, 28-25, in another wild game where the Vikings squandered a nine-point lead but still won.

Minnesota’s offense and defense were sweet and salty yet again, but when it mattered, the units delivered. The special teams group was the steadiest contributor, executing an opportune fake-punt pass for a 1st Down and drilling five successful field goals.

Dalvin Tomlinson continues to serve as the Vikings most consistent defender — perhaps player, in general — now leading all eligible teammates via PFF grade (80.5). He’s arguably the one player who hasn’t authored a “bad” or “meh” game through four weeks. Against the Saints, Tomlinson logged 4 tackles, 2 QB hits, and a sack. Not bad.

Cameron Dantzler had a bounceback game, delivering the 85.9 performance in London. The third-year corner always seems to teeter on playing phenomenally or making a ghastly mistake. In Week 4, he was closer to the former. Dantzler recorded 5 tackles, three passes defended, and a tackle for loss.

A new arrival to such articles, James Lynch had a tackle, playing on 16 defensive snaps. PFF was evidently impressed. His pal Harrison Phillips, like Lynch, recorded a single tackle, but that was enough to move the PFF needle.

Finally, Patrick Peterson made an impact with his best game of 2022 to date. He notched 3 tackles and two passes defended en route to the topsy-turvy win.

As a team on defense, Minnesota is still a work in progress. It’s performing well on 3rd Down (11th-best in NFL) and limiting 2nd Half points to opponents (ninth-fewest leaguewide), but it ranks 27th in yards allowed.

The Vikings host the Justin Fields-led Chicago Bears in Minneapolis on Sunday.