The Vikings Most ‘Intriguing’ Player, According to PFF 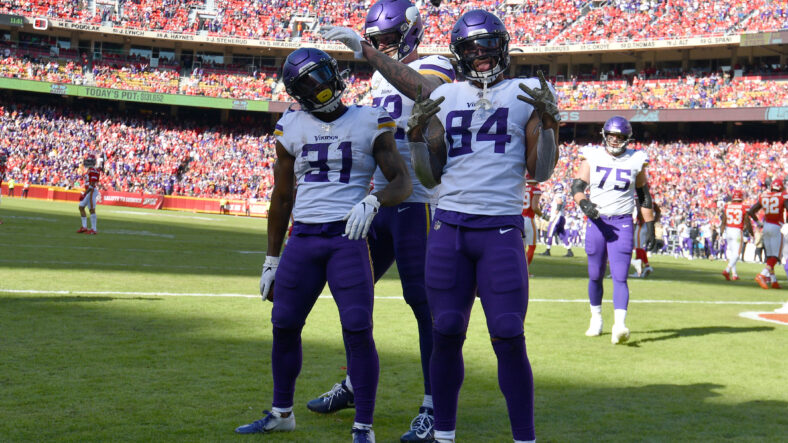 Not Andrew Booth, Ed Ingram, Harrison Phillips, or Za’Darius Smith — Irv Smith is the Minnesota Vikings most “intriguing” player at the team’s training camp, according to Pro Football Focus.

PFF nominated an intriguing player from each NFL team with training camps in full motion, and the Vikings fourth-year tight end evidently gets the nod.

Smith was injured on Monday, so indeed, some intrigue exists for the Alabama alumnus. He’s expected to miss a few weeks — essentially all of training camp — but to be ready for Week 1 versus the Green Bay Packers. Smith had thumb surgery on Tuesday.

On Smith’s intrigue, Ari Meriov of PFF explained, “Expect Smith to be featured in a unit that is already stacked with talent. Better yet for Smith, he’s entering the final year of his contract and could be bound for a payday if he has a successful season.”

Smith will certifiably be featured in the Vikings offense — when his thumb heals. Annually, Vikings fans and fantasy football gurus forecast a big season for Smith. But the output, sans the 2021 season when he tore his meniscus, is usually loaded with mere flashes of upside, not an all-out rise to stardom.

The Vikings employed tight end Kyle Rudolph during Smith’s first two seasons, so the young tight end was not allowed a large target load from quarterback Kirk Cousins. But when Rudolph left for the New York Giants in 2021, most believed it was Smith’s “time.” That may have been true, but the season-ended injury in 2021 canceled the arrangement.

Thankfully for Smith’s sake — and perhaps to the chagrin of roster depth — the Vikings have no other Rudolph-like target hog in 2022 at tight end. If he’s healthy, it should be The Irv Smith Show, as the men behind the 23-year-old on the depth chart are virtually anonymous — Johnny Mundt, Ben Ellefson, Zach Davison, Nick Muse, and Shaun Beyer. During the last few seasons, Minnesota always had a one-two punch at TE, some combination of Rudolph, Smith, and Tyler Conklin, who now plays for the New York Jets.

Smith has produced 676 receiving yards and seven touchdowns in 29 career games. To date, Minnesota targets him 3.1 times per game, a puny total for a TE drafted in the 2nd Round three years ago.

Should his thumb heal in time, Smith will be allotted attention as an undisputed TE1 for the first time. If injuries undermine Smith for a second straight season, Johnny Mundt will be called upon — or a free agent to be named later.

Other intriguing players mentioned by Meirov? Velus Jones for the Chicago Bears, Jayron Kearse with the Dallas Cowboys, and Tyler Conklin of the Jets, among others.