The Vikings Employ the Best Offensive Lineman in Football 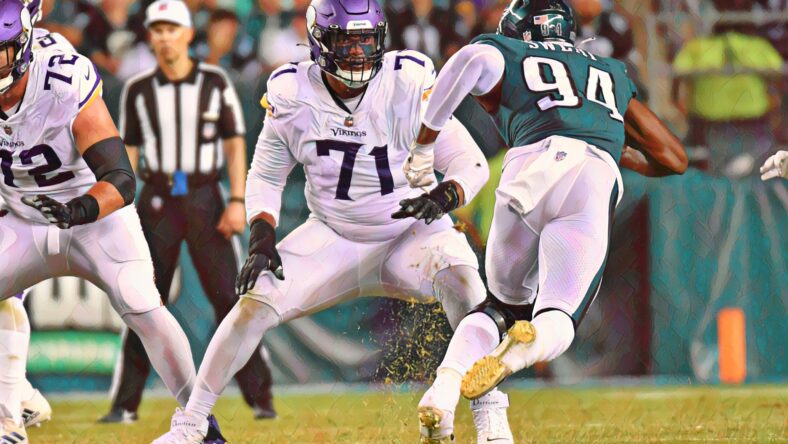 That’s right. Christian Darrisaw, the Vikings second-year left tackle, is the real deal, who just so happens to own the NFL’s highest Pro Football Focus grade among offensive linemen.

Ten weeks are in the books of the 2022 regular season, and Darrisaw is the pace-setter, out-grading household names like Trent Williams and David Bakhtiari.

Vikings fans had high hopes that Darrisaw would mature into a Bryant McKinnie-ian type of left tackle, but the speed at which the Virginia Tech alumnus has progressed is turning heads. Darrisaw isn’t merely “good for a second-year player.” He’s the best offensive lineman in football with the season’s midpoint in the rearview.

According to PFF, these are the league’s top offensive linemen after Week 10:

Darrisaw arrived with the Vikings via the 2021 NFL Draft. Former general manager Rick Spielman traded back nine spots with the New York Jets to accumulate more draft capital, swooping in with the 23rd overall pick to make Darrisaw a Viking. Spielman also landed Kellen Mond (QB) and Wyatt Davis (G), but neither man plays for the team anymore. The Jets used the trade to draft Alijah Vera-Tucker (G) and Brandin Echols (CB).

Aside from the Mond and Davis riders, the trade worked, as Minnesota craved a franchise tackle for about a decade. Men like Riley Reiff did a decent job holding down the spot, but none were as proficient as the 23-year-0ld Darrisaw.

At age 23, the sky is the limit. Of course, the PFF grade can fluctuate weekly, and Darrisaw could slip to third or fourth by next week. But who cares? Darrisaw has taken about one full season of game-time to establish his supremacy over the rest of the NFL, partnering with Vikings RT Brian O’Neill to formulate a formidable force.

Heading into last week’s game with the Buffalo Bills, future Hall of Famer Von Miller called the Vikings offensive trenches the best Buffalo had played against in 2022. Betting money suggests Miller was likely talking about the tackles — Darrisaw and O’Neill.

Darrisaw puts his best-in-the-business PFF mark on the line this weekend versus the Dallas Cowboys. The Vikings haven’t beaten the Cowboys at home since 2010.