The Top 6 Lions Players the Vikings Will See on Sunday 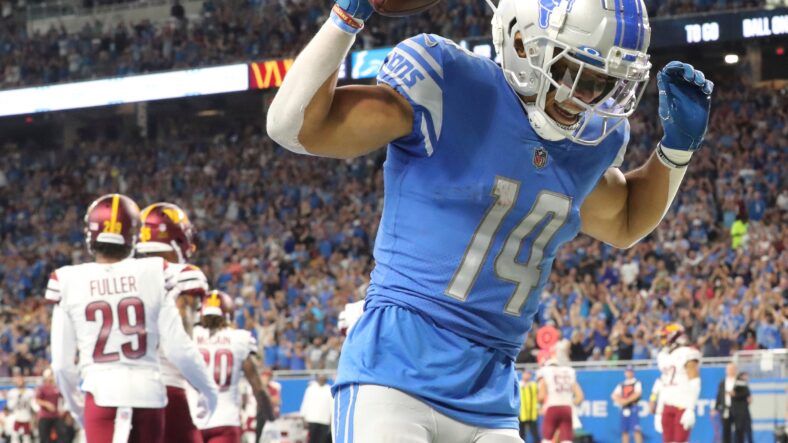 The Vikings will face the Detroit Lions on Sunday in their second NFC North matchup. In the first one, the Vikings easily beat the Packers 23-7. One of the two teams will be 2-1 and be a playoff contender while the other must fight to get back to .500.

Detroit is a much better team than they have been in recent years, and they have some talented players. But who are the six best players on the roster?

Taylor Decker is the left tackle and blindside protector of Jared Goff. Since the Lions selected him in the first round of the 2016 draft, he’s been the man on the left side of the offensive line. Shoulder surgery in 2017 and a finger surgery in 2021 limited him to about half of the games in those years.

In every other season, however, he has been a reliable player. He does not get the credit he deserves in terms of accolades like Pro Bowl trips and All-Pro nominations, but he does his job at a consistently high level at both run blocking and passes protection.

Hutchinson is a rookie EDGE rusher with just two games on his resume. In those two games, he sacked the opposing quarterbacks three times. He´s a disruptive player and can be lined up all across the defensive line. Similar to Za’Darius Smith, Hutchinson has gotten some snaps as a defensive tackle.

PFF credits him for nine pressures throughout the first two career games. He’s also good at stopping the run, an underrated skill of defensive ends. The second overall pick was able to stay at home when the Lions picked the Michigan native who played college football for the Michigan Wolverines in the Big Ten. Hutchinson is the lone star on a defense filled with solid players across the board.

The right tackle of the Lions was a highly regarded prospect in college football. Penei Sewell played for Oregon and started at left tackle as a freshman and sophomore before opting out of his junior year.

The Lions selected Sewell seventh overall. The Oregon product is still one of the youngest players in the league at just 21 years old and has already gotten one year of experience under his belt.

The American Samoan native needed a few games to get used to playing at the right side of the line but quickly became one of the best offensive tackles in the game. He’ll face Danielle Hunter and Za’Darius Smith frequently on Sunday. Sewell is not as consistent as Decker on the left side but can play at a higher level.

He has looked unstoppable and is slowly climbing up the wide receiver ranks in the perception of NFL pundits. St. Brown scored a touchdown in six consecutive games and wants to continue that streak against the shaky cornerbacks of the Vikings. Cameron Dantzler, Patrick Peterson, Chandon Sullivan, and potentially Akayleb Evans have to make sure to contain the dynamic receiver.

The running back is a hot commodity in the world of fantasy football but is just as good in real life. Swift is averaging an insane average of 10 yards per carry. His wide skillset of catching and running the ball makes him a three-down back. He’s also a big play waiting to happen. The offensive line is a big part of the running success of every NFL running back and the Lions’ offensive line is excellent.

So far, the running defense of the Vikings has been one of the worst in the league and something has to change to stop the Lions and their running game. Defensive coordinator Ed Donatell has to adjust his defense. Swift is currently leading the league in yards per carry before contact and after contact. That shows the level of play from the offensive line and the runner.

The center was born in Victoria, Minnesota, and is another former first-rounder on the offensive line. He came into the league in 2018 and was the 20th overall pick. Since then, he’s been the man in the middle of the Lions’ offensive line. He earned a trip to the Pro Bowl in 2020 and was also named to the second-team All-Pro in that season.

A toe injury limited him to just four games in 2021. Ragnow is an outstanding run blocker and fits the playing style of the Lions. He’ll face the important matchup in the trenches. His opponents will be Harrison Phillips and Dalvin Tomlinson.