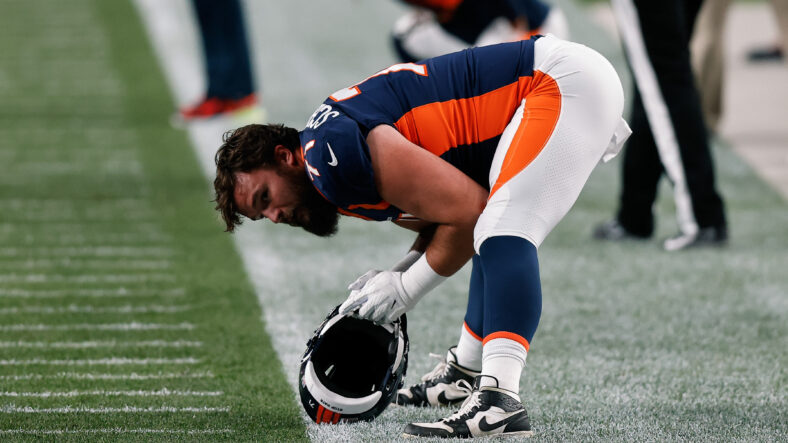 Garrett Bradbury “contingency plans” have been a popular topic of conservation about the Minnesota Vikings since the start of training camp. The fourth-year center enters a do-or-die year with the Vikings as 2022 is the final year of his contract.

Another dark horse has emerged as Bradbury afterlife, though — free-agent signee Austin Schlottmann.

For most of the summer, Schlottmann has been painted as just “a guy,” but his performance in the preseason versus the San Francisco 49ers was rather noteworthy. The Vikings needed all the positives they could find in preseason game #2 because most of the game was lackluster.

The ex-Denver Bronco actually played a lot on Saturday against San Francisco, snapping the ball 38 times while registering a 92.2 grade from Pro Football Focus. Wowzers.

Most reasonable NFL brains would glance at a PFF grade for a backup center, examine the preseason word next to the box score, and never think another thing about Schlottmann. However, this is the Vikings at hand, a team that has struggled at center with pass protection for 4+ years. So, when Schlottmann unexpectedly performed well, lightbulbs flickered.

The one-game grade was so intriguing because Schlottmann hasn’t been a high-octane performer since entering the NFL in 2019 (the same year as Bradbury). To date, this is Schlottmann’s PFF resume:

And that’s not exactly ideal. Yet, Schlottmann, starting his fourth campaign, lives in a territory where he could still blossom if afforded the chance. If he were a 2013 draft alumnus or so, the ship would’ve likely sailed on his “upside.”

The Vikings have indicated a couple of times in the last month that Bradbury’s job at center isn’t cemented. Reed could still sneak up and steal the job. And as a wildcard, especially as he made the most of his preseason opportunity, Schlottmann now cannot be ruled out either.

Minnesota announces all starters and roster cuts on August 30th.