The NFL’s Best WR and Other Week 10 Vikings Takeaways 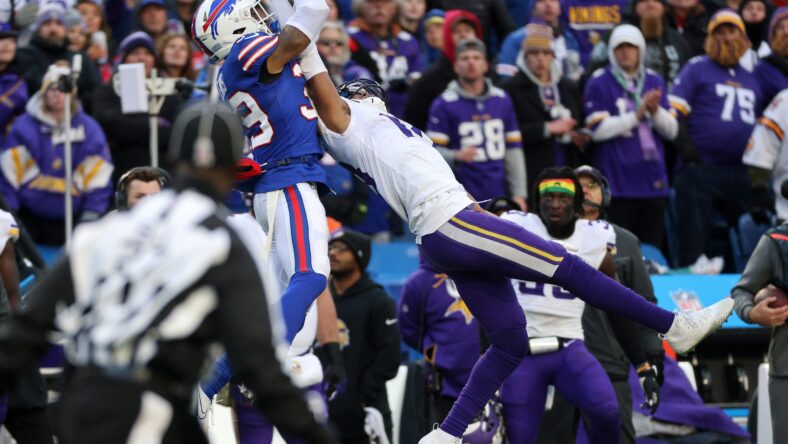 The Vikings pulled off the victory in a hostile crowd in Buffalo and added another win to their record. Now at 8-1, the Vikings are in a prime position to win the division and secure the second seed in the NFC, allowing two home games in the playoffs if the first one ends in a win. Like after every game, we learned a few things about the Vikings.

Justin Jefferson entered the season as one of the league’s top wideouts, but consensus rankings don’t exist, and opinions vary. Jefferson ranked himself at the second spot behind only Davante Adams. Others had one or more of Cooper Kupp, Tyreek Hill, Ja’Marr Chase, and Stefon Diggs ahead. After the Vikings played their first nine games, Jefferson is only trailing Hill in terms of receiving yards.

The Dolphins receiver had a historical start into the season after the Chiefs traded him to his new team. Chase struggles with an injury, and Adams and Kupp have a less productive year. On Sunday, Jefferson had the opportunity to go up against Diggs. The two famously were traded for each other; at least the pick the Vikings used to draft Jefferson in 2020 came from the Bills as the primary return for Diggs.

Jefferson started hot with two amazing grabs in the first Vikings scoring drive, had multiple impressive-looking catches, and was possibly the best snatch in NFL history. A Bills defender was in a much better position to make the catch, but after the two went to the ground, Jefferson surprisingly had the ball in his hands.

The difficulty of the play was insane, but it got even enhanced because it was a conversion of a fourth and 18, a play the Vikings had to have to stay in the game. Overall, Jefferson finished with 10 catches for 193 yards and a touchdown. He is the clear focal point of the offense, and defensive units know exactly who’s getting the ball, but they can’t stop it.

The argument that the Vikings may not be a contending team felt forced in the last couple of weeks. After this week’s win, doubters can finally put their fraud allegations to rest, something that should have happened weeks ago. The game against the Commanders was not an easy win, as Washington’s defense played like an elite unit, and Heinicke made a few plays. In the end, the Vikings pulled off the victory, something they have done in every game since Week 3. Currently, the team is on a seven-game winning streak.

The Bills were considered Super Bowl favorites by most experts before the season started and haven’t done much to suggest otherwise. In addition to a few blowout wins, the Bills even beat their nemesis, the Kansas City Chiefs. The team was a 6.5-point favorite at home when the Vikings came to town despite some Josh Allen injury concerns.

It was a hard-fought game, but the Vikings were able to move the ball against the Bills and made a few stops. The most important part, however, was the Vikings’ ability to take advantage of the Bills’ mistakes. The team showed that it’s never giving up, no matter what the scoreboard says, as they were down 17 points in the third quarter and ten in the fourth and came back to win the game.

Patrick Peterson Is a Time Traveller

The cornerback turned 32 in July, and the position requires elite explosiveness, so most players decline in their late 20s or early 30s. Even Peterson had his worst career season in Arizona in 2020. His 2021 season in Minnesota was better but not close to the prime Peterson, the perennial Pro Bowler.

Ed Donatell, the new defensive coordinator, implemented a new system and somehow, Peterson is looking like the superstar cornerback again. He is still a great athlete, and his football brain is unmatched. Peterson jumped countless routes this season and did the same thing on not just one but two interceptions in the own endzone against the Bills. Without his heroics, the Vikings don’t win the game.

Two struggles, in particular, are annoying Vikings fans all around the globe — Ed Ingram’s rookie mistakes and Greg Joseph’s missed kicks. Joseph made every kick in Week 9 in Washington but missed his fourth extra point against the Bills.

That mistake could’ve cost the Vikings the game, as a field goal in the final minute of the game would have tied it had Joseph made the extra point. Instead, the Vikings had to go for it on fourth down, Kirk Cousins was stuffed on a QB sneak, and the Vikings turned the ball over on downs. Joseph made what later turned out to be the game-winning field goal, a 33-yarder in overtime.

Ed Ingram’s pass protection among guards has been the worst in the NFL. This game showed a new struggle when he stepped on Kirk Cousins’ foot twice. The first one nearly led to a fumble, and the second one ended in a loss in a crucial situation in the red zone. Minnesota’s coaching staff has to consider benching the rookie because this season is too valuable to give it away like this.