The Jet Once Again Lands in Missouri 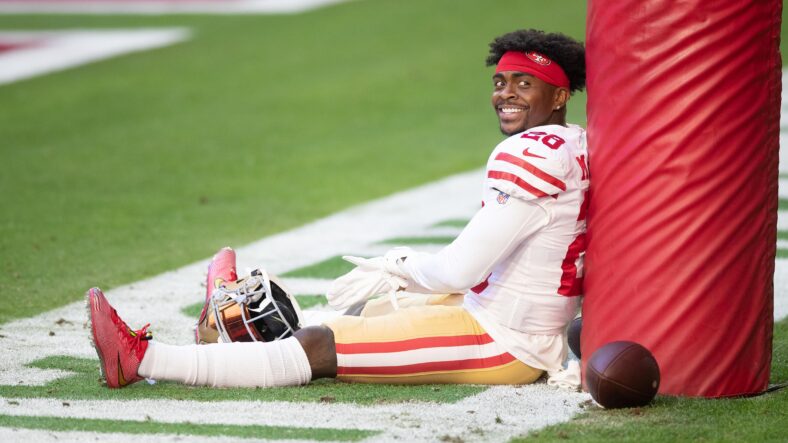 In the 2014 NFL Draft, former Vikings general manager Rick Spielman selected a small-school running back, despite employing the future Hall of Famer and face of the franchise, Adrian Peterson, at the time. ‘The Jet’ still found a way to make a significant impact on the organization.

McKinnon was born in Atlanta, Georgia, just over 30 years ago. In High School, he ran track and played football in multiple positions, as he was lined up as a quarterback, running back, and wide receiver. After receiving numerous honors, he accepted the offer of Georgia Southern over scholarship offers from Air Force and Navy.

The former three-star recruit was recruited as a quarterback. He played that position in his first three years in the Georgia Southern triple-option offense and used his high-end speed as a runner. As a freshman, McKinnon recorded 430 yards rushing in 109 attempts.

As a sophomore, ‘The Jet’ was the only player on the roster to throw, rush and catch a touchdown in that season, which shows his versatility. Overall he had nine touchdowns in 2011.

In his junior season, McKinnon rushed for impressive 1,817 yards, the third-most in a single season in school history. Hilariously, the leader in that category is Adrian Peterson, who had 1,932 yards in 1998. However, it is not the Vikings’ Adrian Peterson. After recording another 1,000 rushing yards as a senior, McKinnon was invited to the Reese’s Senior Bowl.

The undersized running back dominated the NFL Combine. He ran the second-fastest 40-yard dash among running backs with 4.41 seconds, and his 32 bench press reps were the most. His wait for a call on draft day stopped when the Vikings picked him with the 96th pick. The pick was part of the Percy Harvin trade to the Seattle Seahawks.

Career as a Viking

McKinnon was asked to play in his rookie year because Adrian Peterson was placed on the commissioner exempt list and was not allowed to play after the first game of the season. McKinnon split reps with Matt Asiata and recorded over 500 yards. He was the more dynamic rusher than Asiata, recording 4.8 yards per carry, compared to the 3.5 of Asiata. His first start came in Week 6 against the Lions. Teddy Bridgewater and McKinnon became the first rookie running back/quarterback tandem to start a game for the Vikings since 1961, when Fran Tarkenton and Tommy Mason started.

In 2015, star halfback Adrian Peterson returned to the lineup and led the league in rushing yards. McKinnon was the backup and recorded almost 450 yards from scrimmage.

Peterson once again missed big parts of the season in 2016, and McKinnon led the team in rushing yards for the first time in his career. He had almost 800 scrimmage yards. Peterson left the franchise before the 2017 campaign started, and the Vikings drafted Dalvin Cook and signed Latavius Murray. McKinnon opened the season without a lot of chances to see the field. However, Dalvin Cook tore his ACL in Week 4, and McKinnon had to step in.

Murray and McKinnon replaced Cook and did a wonderful job in the season where the Vikings finished with a 13-3 record. The former Georgia Southern standout recorded almost 1000 scrimmage yards and five touchdowns, especially his screen game was a dangerous weapon for quarterback Case Keenum.

Bad Luck After Leaving the Vikings

He became an unrestricted free agent after the season, and Kyle Shanahan’s 49ers signed him to a big contract worth $30 million. Sadly, just before the season started, McKinnon tore his ACL, which ended his season. Then, in Training Camp 2019, a setback put an early end to his comeback. He did not only miss two full seasons, but he also missed the team’s run to the Super Bowl, ending up losing to Patrick Mahomes and his Chiefs.

In 2020, ‘The Jet’ was finally able to fly again, as he played in all 16 games and recorded over 500 yards from scrimmage and six touchdowns. After the season, McKinnon was a free agent once again and signed with the Chiefs. He appeared in 13 games but almost didn’t see the field. In Week 18, the former Viking had his first touchdown for his new team. In the playoffs, however, McKinnon had his big game against the Steelers. He recorded 142 scrimmage yards and a touchdown in the big win. After the game, he was regularly featured in the playoff run that ended in the AFC Championship Game.

Now Jerick McKinnon returns to the Chiefs on another one-year contract.

He is looking to build on his strong performances in the postseason and get a bigger role in 2022.