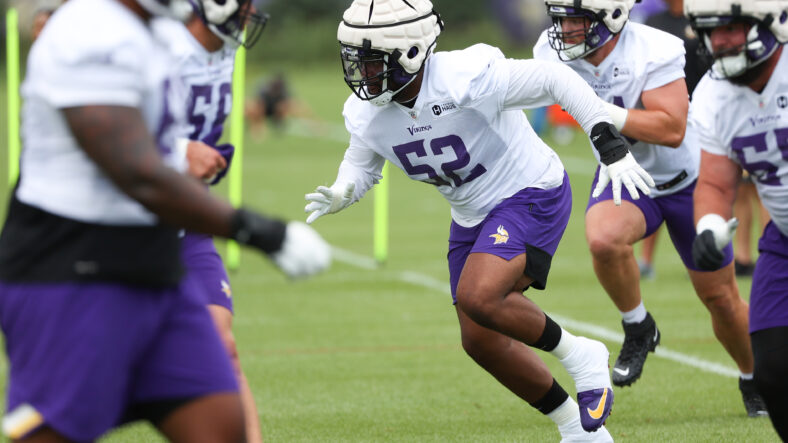 The Minnesota Vikings released an unofficial first depth chart on Wednesday as the preseason slate of games begins this weekend.

And on the categorized list of personnel, second-year offensive lineman Wyatt Davis was buried, furthering his case as a forgotten Viking.

Although the Vikings characterization system was a little bland, Davis appeared to be situated as the team’s backup-to-the-backup right guard. Ahead of Davis on the roster were Jesse Davis, a free-agent addition from the Miami Dolphins, and Ed Ingram, a rookie from LSU.

Davis found his way to Minnesota in the 2021 NFL Draft after former general manager Rick Spielman traded the 14th overall pick and a 4th-Rounder to the New York Jets for the 23rd overall pick and two 3rd-Rounders. When the deal flushed out, this was the result:

In the immediate aftermath of the swap, Vikings fans rejoiced as expectations were high for Darrisaw — he hasn’t disappointed — Mond was a development QB1 prospect, and the franchise received a draft “steal” in Davis.

Well, since the trade, Davis has been totally anonymous in Vikings dealings, unable to get off the ground as a rookie and trending in a similar fashion for his sophomore campaign.

If Davis does not shine in the next three preseason games, he seems like an automatic roster cut, especially after Minnesota added Jesse Davis, Chris Reed, and Ed Ingram this offseason. Once upon a time, Davis was theorized as a starter. Why? The Vikings were embroiled in persistent RG doldrums — that are arguably still ongoing — with Dakota Dozier, Dru Samia, and Oli Udoh on tap as solutions. Neither Dozier, Samia, or Udoh solidified the right guard woes. Meanwhile, Davis hasn’t been granted an opportunity.

During the lead-up to the 2021 NFL Draft, at least early in the annual cycle, some nominated Davis as a 1st-Round talent. In 2019 and 2020, Davis earned 1st-Team All-Big Ten honors and was one of the best collegiate guards in the nation. That’s why Vikings enthusiasts believe an unearthed gem could be on the roster.

Yet, with a separate and brand new coaching staff led by Kevin O’Connell, Davis is all but forgotten in the Vikings plans. In theory, with his robust Ohio State resume, Davis should be vying for an RG2 job. No cigar.

The next step, if he is indeed released at the end of the month, is to determine if the 23-year-old catches on with a different team.