The Bears Key Players at Vikings 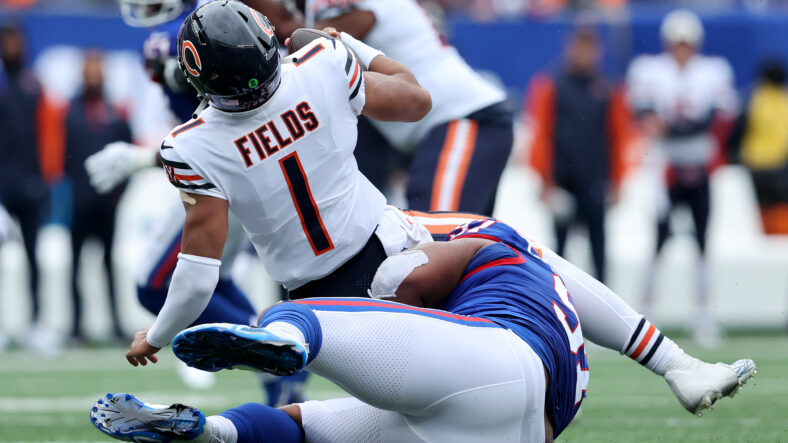 The Minnesota Vikings head into a Week 5 showdown with divisional rivals the Chicago Bears. The Vikings will look to move to a 4-1 record, including three wins in the division, with a victory at US Bank Stadium despite the questions raised about performance and consistency.

That would be a solid start to the season, especially considering the one loss came against the only unbeaten team in the NFL after four weeks — a 24-7 humbling by the Philadelphia Eagles back in Week 2. If the Vikings are to make it three wins in a row, who are the Bears key players the Vikings must stop?

Although Justin Fields continues to struggle in Chicago, the opposing quarterback will always be a pivotal player. The Vikings should be wary of him because of his skill set. Fields is similar to Eagles quarterback Jalen Hurts, who gave the Vikings defense a torrid time in the Week 2 blowout on Monday Night Football. Fields doesn’t have the offensive line, weapons, or defense to back him up like Hurts. However, he does have similar physical traits and the ability to use his legs to make plays.

The Bears offense will need to control the game on the ground. Of course, that means the running backs will be key players. Lead back David Montgomery missed last week’s game against the Giants after injuring his ankle in the Week 3 win over the Texans. He only managed to log two limited practices this week and is questionable for the game on Sunday.

Montgomery’s absence would be a boost for the Vikings. However, his understudy Khalil Herbert has proved himself capable in his absence. After taking up the lead role against the Texans following Montgomery’s injury, Herbert rushed for 157 yards off of just 20 carries, including two scores.

Leading from the front from the start against the Giants, it wasn’t quite as explosive. Herbert managed 77 yards from 19 carries at just over 4 yards per carry, which is still a solid effort. The Vikings defense has continued to struggle to contain the run this season. The Bears duo will hand the Vikings another stiff challenge if Montgomery is good to go.

With the Bears top cornerback, Jaylon Johnson, listed as doubtful on the injury report, it is unlikely that he will play, which leaves the Bears with a significant headache in the secondary. Johnson picked up a quad injury in practice before the Week 3 game with the Texans. The Bears cornerbacks have struggled without him, despite coming up against two teams whose passing attacks don’t give defenses an awful lot to fear. Unlike the Texans and Giants, the Vikings have an experienced quarterback and Justin Jefferson leading the way for their high-octane offense.

The Bears will lean heavily on safety Eddie Jackson. I think he is Chicago’s best player, and the stats bear that out. He has an interception and pass deflection in three of the four games this season. He also has a tackle for loss and a forced fumble and is the highest-rated Bears player according to PFF with 78.2. Rookie Jaquan Brisker is the other starting safety, and he has made a solid start to his NFL career. The game plan should be evident for the Vikings, don’t throw the ball near Jackson, and there’s a good chance you will succeed.

Do you remember the much-vaunted Chicago Bears defense of 2018? A defense that led the Bears to their most recent division title four years ago and was voted the second-best of the decade, behind only the 2015 Broncos? Four years on, and all that is left of that defense, other than Jackson, as mentioned earlier, is linebacker Roquan Smith.

Like Jackson, Smith is still a talented player, leading the league in tackles through four weeks with 46. He has second-team All-Pro honors from the last two seasons and is undoubtedly one of the best linebackers in the game.

After initially demanding to be traded if the Bears didn’t offer him a new contract, Smith settled on seeing out the final year of his rookie contract. He is now playing to impress potential suitors in the hope of receiving a bumper contract next March. Smith has referred to this year as a “bet on myself” season, and so far, the results have been promising. Like Jackson, he is one of the Bears players who can make big game-altering plays — such as the interception in Week 3 against the Texans that led to the game-winning field goal. The Vikings offense mustn’t give the Bears best players a chance to overly influence the game.