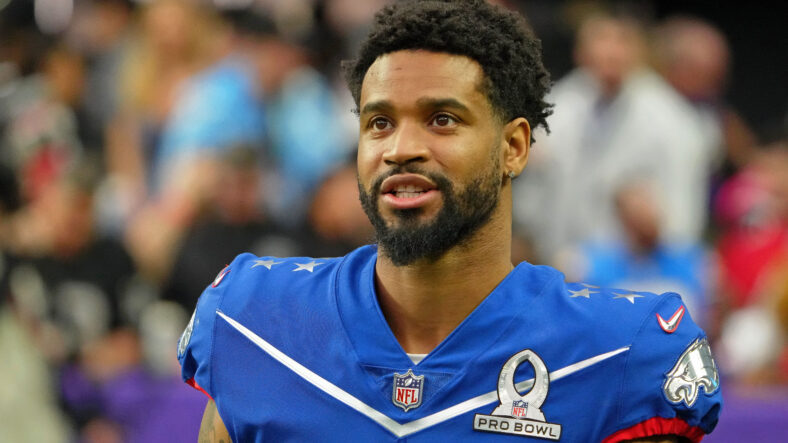 Philadelphia Eagles cornerback Darius Slay is excited to face the Vikings in the upcoming season for one obvious reason — Justin Jefferson. The Vikings superstar receiver is one of the favorite matchups for elite athletes, as they want to get tested by the best of the best.

Slay is no different, as he wants to go up against Jefferson and said he circled the game against him in Jefferson’s NFL Top 100 video.

“He’s special. Exciting, electric,” Slay said. “He’s everything you want in a number one receiver. You know I see him on my schedule next year. I got him circled up.”

He also added that he has already looked at some game tape of JJ and that he’s going to be prepared.

Slay is a four-time Pro Bowler and a 2017 All-Pro, despite playing outside of the national spotlight in Detroit for most of his career. In 2020, the Eagles traded for him, and since then, he’s been their top cornerback.

Slay is 31 years old but is still playing at a high level. In addition to receiving the best grades of his career from PFF, he attended the Pro Bowl in 2021. He was graded as the fourth-best cornerback in the league. Slay will lose a step in the near future, but until that’s the case, he’ll be one of the best players in the league and a formidable opponent for Justin Jefferson.

The two stars will face each other early in the season, in Week 2. It will be a Monday night doubleheader in Philadelphia. Both teams open the season against a team out of the NFC North, as the Vikings will play at home against the Packers, while the Eagles will play in Detroit.

Both teams are fully expected to be much improved from last year. The Eagles added a ton of talent in the offseason. Their first-round pick was a teammate of Lewis Cine at Georgia, Jordan Davis. The gigantic defensive tackle is a one-of-a-kind player. He’ll fit in right next to Fletcher Cox. The duo will be a huge challenge for the Vikings’ interior offensive line, especially Garrett Bradbury, the undersized center.

The significant addition on offense is A.J. Brown. The Eagles acquired the star wideout via trade, and he’ll improve the receiving group for Jalen Hurts tremendously.

Meanwhile, the Vikings changed the front office, and the coaching staff to get more out of the talented roster and added Za’Darius Smith, Jordan Hicks, and Harrison Phillips on defense.

Jefferson will play Jaire Alexander and Darius Slay in back-to-back weeks to open the season. The Vikings wideout has done enough to earn the respect of his peers. In his first season, he broke the rookie receiving record. In his second season, he broke the record for most yards in the first two seasons. The 3,016 yards are also the most in the NFL in the last two seasons.

His connection with Kirk Cousins is brilliant to watch, and the two are a tough matchup for anyone. Kevin O’Connell is his new head coach, and he helped to turn Cooper Kupp into a superstar in Los Angeles. Subsequently, Jefferson may be even more unstoppable in the upcoming season.

The Eagles will likely try to cover Jefferson with Slay by himself. If that fails, and it does most of the time, Jefferson must deal with safety help. No matter the coverage, the matchup will be fun to watch.