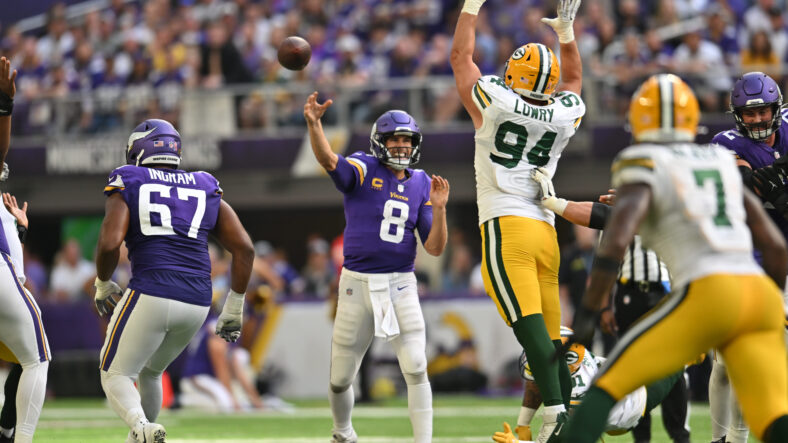 The Vikings selected ten players in their 2022 draft, the first with general manager Kwesi Adofo-Mensah at the helm. Nine made the 53-man roster. The lone exception is tight end Nick Muse, who is on the practice squad. In addition, undrafted rookies Luiji Vilain and Ryan Wright are on the team. We’ll take a look at all Vikings rookies. Most of them didn’t play in Week 1. However, they are rookies, and their roles will expand in the future.

The first-rounder missed what could’ve been his NFL debut with a knee injury. His name started to appear on the injury report on Thursday after practicing on Wednesday. He was the biggest name on the inactive list.

The team made clear that the injury was not a big deal. He missed Week 1 but is on track to play in Week 2. Expect him to play a rotational role in three safety looks and on special teams.

The second-round cornerback had an unfortunate debut. First, he was usurped by fellow rookie Akayleb Evans on the depth chart, and then he suffered a hamstring injury. Booth only appeared on two special teams’ snaps.

It has always been expected that the former Clemson star would need time to develop. He has to learn how to control his high-level aggressiveness first. In addition to that, he missed time in training camp. He’s getting treatment and his availability in Week 2 is in jeopardy.

The lone starting rookie on either side of the ball was tested by Kenny Clark in his first game. Ingram was dominant in the running game but made too many mistakes in pass protection. Five pressures allowed are way too much. However, like most rookies, he needs a few plays or even games to get used to more powerful and faster defensive linemen than he faced in college, even if he played in the SEC.

PFF graded him as the second-best guard in the running game in Week 1. Overall, he finished the week as the sixth-best guard.

He’ll face the next tough opponents, Jordan Davis and Fletcher Cox. Expect him to bounce back, as he’s too talented to allow five pressures again. Clark definitely gave him his ‘welcome to the NFL’ moment.

The linebacker did not appear on defense. Starters Kendricks and Hicks rarely leave the field. He has shown impressive explosiveness in the preseason and will be a contributor at some point. Currently, the Vikings have the luxury to keep him on the bench and get more practice reps in first.

Asamoah is by far the most explosive linebacker on the Vikings roster, and therefore, he’s a great fit on Ed Donatell’s defense. In the preseason, he made a few too many mental errors, as he’s using his instincts to make plays. However, that can sometimes backfire, especially against smart NFL quarterbacks.

Starter Cameron Dantzler needed a few plays off, and Evans replaced him for exactly six snaps. Rodgers targeted him once, and he allowed a nine-yard catch but also made the tackle. It’s encouraging that he’s already a backup, but it’s hard to take away a lot from the few snaps he played. If Dantzler and Peterson are healthy, Evans won’t play a lot. However, he was a fourth-rounder, so no one should expect him to.

The former Minnesota Golden Gopher was inactive. He was always meant to be a developmental player with a high physical upside. In college, Otomewo played as an edge rusher. In the pros, he moved inside. That transition takes time. The fact that he made the roster is a good sign. Adofo-Mensah hand-picked him, and the regime will be patient with him.

The running turned heads in training camp and was absolutely sensational in the preseason. If he were on most other teams, he would get a ton of snaps. However, the Vikings are so deep at running back that they had to keep Chandler inactive. Running back is a high-risk position, and players will get hurt. It’s a good thing that the Vikings have four good runners on the team. He’ll get his chance at some point.

The Vikings surprisingly kept five offensive tackles on the 53-man roster. Lowe played well in the preseason, especially in pass protection. He was inactive, and it’s unlikely that he’s playing a role in 2022. He has a good chance to become the backup swing tackle in the future.

The wide receiver was active but didn’t appear on offense, as the Vikings went just three deep at wide receiver. Nailor played on 13 special teams snaps. His contributions were the key to making the roster. He has a chance to develop into a quality receiver down the line, but at this point, he’s a special teamer.

The tight end is on the practice squad, but the Vikings used the tight ends more than expected. That could be good news for Muse’s future.

The edge rusher was inactive. In his absence, the four outside linebackers, Danielle Hunter, Za’Darius Smith, D.J. Wonnum, and Patrick Jones, wrecked all kinds of havoc. Like Otomewo, he’s currently a developmental player with good physical tools.

Punters are always flying under the radar. Four of his five punts landed inside the 20-yard line. He had a good debut, and because of his big leg, we can expect many more highlight punts than in recent years.