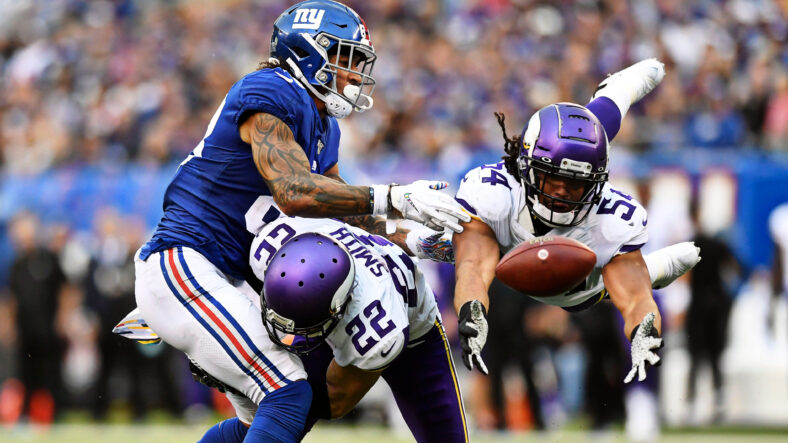 In the last five seasons (since the start of 2017), the Minnesota Vikings have registered a 46-34-1 (.574) record, with two playoff trips, two playoff wins, and no Super Bowl triumphs.

Those marks are attributable to Mike Zimmer, who left the organization in January. In 2022, the Vikings will be led by new head coach Kevin O’Connell and a roster largely similar to the 2021 edition.

These are the Top 5 Vikings players since 2017 based on on-the-field contribution.

The lifeblood of the Vikings offense under the Mike Zimmer regime, Cook will transition into a new role in 2022, perhaps more of a pass-catcher with Kevin O’Connell in charge. Cook emerged as a team leader in the last three years, serving as guaranteed offense when healthy.

He was at the peak of his powers during the 2020 season, quietly registering an Adrian Peterson-like season from a production standpoint. But because the Vikings finished 7-9 that year, Cook’s best season is often overlooked.

Cook is under contract with the Vikings until 2025. He’ll turn 27 next month.

For some reason, Thielen transformed from a “yards guy” to a “touchdown guy” since 2019. He’s the Vikings top redzone threat, ranking third in touchdown receptions leaguewide since the start of 2020. His 24 receiving touchdowns in the last two years are the same number tallied by Tyreek Hill.

Thielen has missed 11 games in the last three seasons, causing some onlookers to speculate a “slowing down” for the 31-year-old. Yet, missing 11 games in three years is not a wild NFL oddity.

He reworked his deal when new general manager Kwesi Adofo-Mensah came to town in January and is under contract through the 2024 season.

Cousins would rank higher on this list if his team reached the postseason more than once in the last four seasons. He was acquired by ex-boss Rick Spielman to “put the team over the top.” The Vikings have not gone over the top with Cousins as QB1.

Still, Cousins is one of the most productive quarterbacks in the NFL, ranking fourth leaguewide in touchdown passes since joining Minnesota in 2018. Sadly for Cousins, the Vikings defense ended its reign of dominance during his third year with the team, tasking him with “dragging the team to the playoffs.” Unfortunately, Cousins is a Matthew Stafford-like quarterback who needs complementary pieces for the enterprise to thrive.

He’s slated to remain with the franchise through the 2023 season.

Regardless, Kendricks has been the cardiovascular system of Minnesota’s defense since he emerged as a Pro Bowler. When he was injured down the stretch of the 2020 season, the team correspondingly collapsed.

Because of longevity, health, and sustained production, Smith takes the #1 spot. He rarely misses games and is a hard-hitting force on the field in a league rapidly reducing “hard hits.”

Smith has been a Vikings stalwart for a decade, and per this last-five-years metric, his performance has not markedly dipped. He’s always available, doesn’t have many “bad games,” and is almost like Tom Hanks with acting — you just expect greatness at this point and don’t even have to mention it when it happens.

ESPN labeled Smith the league’s seventh-best safety heading into 2022 — quite the tip of the cap for the 33-year-old.