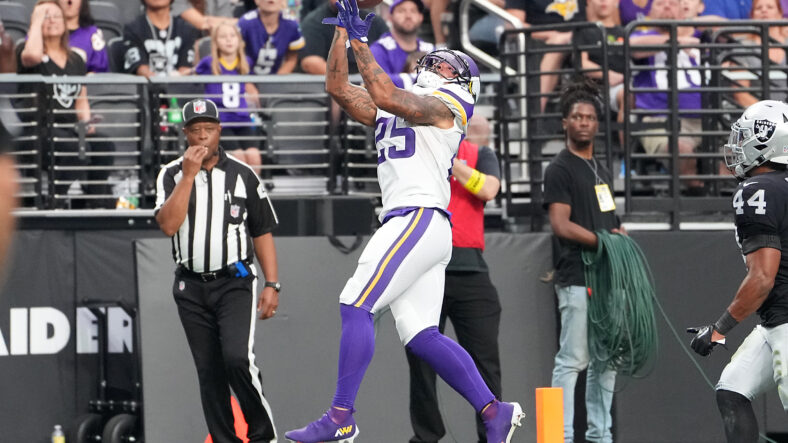 Trying to navigate a 1-4 start to the 2022 season, the Las Vegas Raiders trounced the Houston Texans on Sunday 38-20.

But before that, Las Vegas made a roster involving a former Minnesota Vikings wide receiver, as Raiders general manager Dave Ziegler released Albert Wilson on Saturday.

The Wilson era in Las Vegas was extremely short-lived, lasting just 11 days after the Raiders added the veteran wideout on October 11th.

The Vikings onboarded Wilson at the end of May and kept him on the roster until roster trimdowns in August. He lasted nearly three months on the Vikings 90-man summer roster. When signed by Minnesota, Wilson was theorized as a WR4 type and even a special teams returner. But none of those forecasts materialized.

But Wilson was a treat for Minnesota in the preseason, scoring two touchdowns against those same Raiders on August 14th in Nevada. The two scores weren’t enough, though, for Wilson to secure a 53-man roster spot, and the Vikings cut the veteran wideout loose eight days later. It was the same day that Minnesota traded with the Raiders for QB2 Nick Mullens.

The 30-year-old Wilson is a career WR3-WR4 type, spending his first four seasons in Kansas City during the Alex Smith era and the last three campaigns with various quarterbacks in Miami. In 89 career games, Wilson has grabbed 218 receptions for 2,499 yards and 12 touchdowns. Wilson has also periodically returned kicks.

In college at Georgia State, Wilson was a force. He caught passes, returned kicks and punts, and totaled 6,235 yards, a Top-30 stat ever when he left the collegiate level. The Chiefs found Wilson in 2014 as an undrafted free agent. Wilson was at the peak of his power in 2017, the year before Patrick Mahomes formally rose to power, recording 554 receiving yards on 62 targets.

In lieu of Wilson, the Vikings opted for a WR fivesome of Justin Jefferson, Adam Thielen, K.J. Osborn, Jalen Reagor, and rookie Jalen Nailor. The team has a 5-1 record to show for it through seven weeks.

It is unclear if Wilson will rejoin the Raiders on the practice squad, find another NFL team, or retire.

The Raiders travel to New Orleans for a date with the Saints in Week 8. The Vikings host the 3-4 Arizona Cardinals.