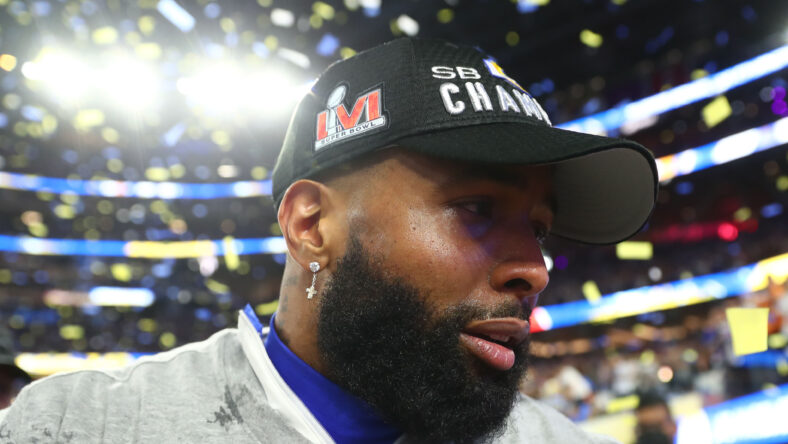 VikingsTerritory’s Purple Rumor Mill is a two-day chronicle each week. All the week’s rumors are lassoed and plopped in two spots — articles on Saturday and Sunday — for review. Today is the November 13th edition.

Along with the Buffalo Bills, Baltimore Ravens, and Dallas Cowboys, the Vikings indeed remain a theorized landing spot for Beckham, who should sign with a team by the end of the month. ESPN tabbed those teams this week.

Evidently, Beckham remains committed to joining a Super Bow contender, which might just be his modus operandi for the rest of his career — a playmaking mercenary who bounces from powerhouse to powerhouse.

ESPN Bill Barnwell wrote about Beckham, “Now, having recovered, Beckham is in a position to flip a playoff race or help push a team toward the Super Bowl for the second consecutive season. If he can stay healthy, he’s still young and effective enough to earn a meaningful deal as a free agent.”

And with his LSU ties to Justin Jefferson, Danielle Hunter, Patrick Peterson, and Ed Ingram, plus Minnesota’s budding Super Bowl contendership, the Vikings cannot be ruled out of the OBJ sweepstakes.

Although, Vegas sportsbooks don’t list the Vikings as frontrunners nor anywhere close to it.

Yes, it seems this act will roll on.

After each road win since the London victory over the New Orleans Saints, Cousins’ teammates have added some form of expensive chain onto the QB1, videotaping the spectacle for social media.

The Pioneer Press‘ Chris Tomasson tweeted Friday, “Something else is planned for Cousins if Vikings win Sunday at Buffalo.”

So, yes — this is a thing, one that will presumably continue until Minnesota stops winning road games. Cousins’ teammates love it, and the 34-year-old ultimate “dad” allows it.

Rumor: Ed Ingram, a rookie, is struggling and should be benched for Chris Reed.

Indeed, Ingram has struggled in recent weeks, perhaps causing the Vikings coaching staff to ponder Chris Reed in the starting lineup. Reed is a journeyman who performed well last year with the Indianapolis Colts.

But Ingram is a 2nd-Rounder chosen by new general manager Kwesi Adofo-Mensah. They’ll probably stay loyal to his cause, as benching the youngster would be a scourge on his career trajectory.

Regardless, there’s a solid case for suggesting Reed would play better — an important contingency plan with the postseason two months away.