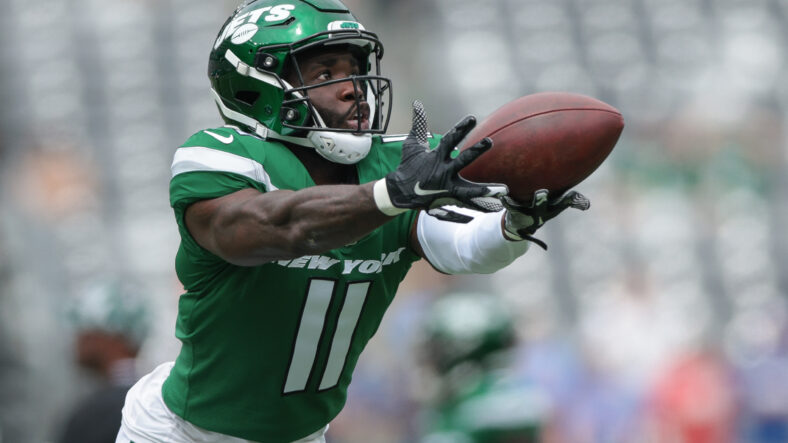 VikingsTerritory’s Purple Rumor Mill is a two-day chronicle each week. All the week’s rumors are lassoed and plopped in two spots — articles on Saturday and Sunday — for review. Today is the October 15th edition.

This is really just an idea or talking point from Bleacher Report. On BR‘s NFL trade big board, the Vikings and Bears are listed as apropos teams to enter the Mims sweepstakes.

It is unlikely to materialize as the Vikings draft capital for 2023 is already skimpy. If Kwesi Adofo-Mensah wanted the benched Jets playmaker, he’d have to convince New York to accept a 5th-Rounder or dip into his 2024 satchel of draft picks.

Mims to Minnesota is a longshot.

Kevin O’Connell forecasted this week that ‘now is the time’ for Asamoah to acclimate within the Vikings defense. Before the win over the Bears, Asamoah only played special teams. But against Chicago, Asamoah experienced his first defensive action of the season, seeing the field for six defensive snaps.

And then this week, O’Connell told reporters, “We’ve got E.K. (Eric Kendricks) and Jordan [Hicks] who have played really well, but we want to be able to mix Brian in there. It’s a long season.”

There’s no reason to believe O’Connell is fibbing, so let the Asamoah era begin.

Rumor: The Vikings are frontrunners — over the Packers — to win the NFC North.

According to Vegas sportsbooks and FiveThirtyEight, this is true. Oddsmakers believe the Vikings will win the division for the first time since 2017. The Packers have won the thing for three consecutive seasons.

Minnesota temporarily holds the head-to-head tiebreaker over Green Bay — the Vikings beat the Packers 24-7 in Week 1 — and Aaron Rodgers and Co. lost in London last weekend.

Therefore, the Vikings have to lose two games while the Packers win two for Green Bay to regain his crown. That’s certainly not impossible, but the Vikings are in an advantageous spot right now.

These are the NFC North odds as of October 14th: