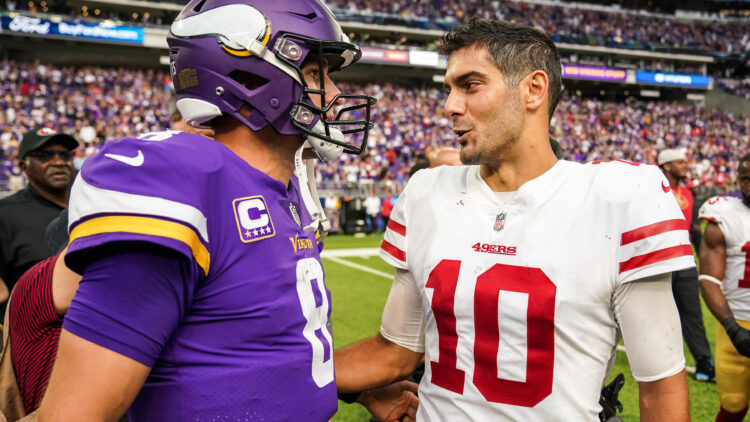 VikingsTerritory’s Purple Rumor Mill is a two-day chronicle each week. All the week’s rumors are lassoed and plopped in two spots — articles on Saturday and Sunday — for review. Today is the October 23rd edition.

Rumor: The Vikings could trade Kirk Cousins to the San Francisco 49ers in the offseason.

While this rumor permeates the Vikings community every offseason, Cousins-to-Niners started early this year courtesy of Zone Coverage.

San Francisco’s head coach Kyle Shanahan has longstanding ties to and respect for Cousins, and that propelled Chris Schad from Zone Coverage to hypothesize, “After presumably souring on Lance, Shanahan could convince Lynch to make one more push for Cousins, giving the Vikings a godfather deal for his archetypal quarterback. Such a deal wouldn’t be cheap, but perhaps the 49ers wouldn’t care.”

Schad’s idea is unlikely to occur for five reasons:

But, this is a warning: Fasten your seatbelt — if the Vikings somehow miss the playoffs or get gutted in Round 1 of the postseason, Cousins trade rumors will heat up per usual.

Abram to the Vikings has been lightly whispered throughout the week as the NFL’s trade deadline approaches on November 1st.

The soon-to-be 26-year-old was a 1st-Round draft pick in 2019, so folks are more familiar with him than other safeties. However, his career to date is underwhelming, and Abram isn’t much better than Vikings current free safety Camryn Bynum.

Abram has played 94% of the Raiders defensive snaps in 2022 and has a 47.6 Pro Football Focus grade to show for it. No thanks.

Rumor: Linval Joseph, the Big Goon, could land with the New York Jets.

Indeed, the Goon worked out with the New York Jets this week and likely has one or two seasons left in the tank.

The Jets are suddenly relevant with a 4-2 record — their best mark through six games since 2015 — and adding roster depth finally checks out for a team that’s usually bottom-feeding by now.

He’d be a smart fit in New York as a reservist nose tackle.