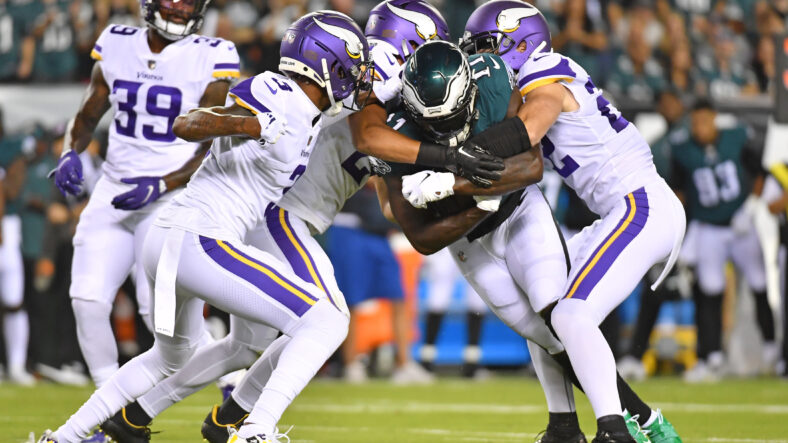 Pro Football Network recently identified every contender’s biggest weakness pre-NFL trade deadline. This involved suggestions for 23 teams regarded as having a chance of the playoffs and ultimately contending for the Super Bowl. The Vikings appear on the list early with the 6th-best playoff odds of 85%. So what does Dallas Robinson of PFN see as the Vikings biggest weakness?

I don’t think there will be many arguments for that conclusion. The Vikings secondary continues to be worrisome, and there are a lot of question marks over the cornerbacks. Here is what Dallas Robinson of PFN had to say:

While the Vikings could use an upgrade at swing tackle, their starting offensive line has played so well that OL probably isn’t a massive concern for Minnesota. Instead, they could search for corner depth.

The Vikings’ starting nickel package (Patrick Peterson, Cameron Dantzler, and Chandon Sullivan) is acceptable. But second-round rookie Andrew Booth Jr. has only played on special teams and is just now returning from injury. Minnesota would be wise to improve over Akayleb Evans and special teamer Kris Boyd.

Swing tackle is an interesting thought. The Vikings currently have Blake Brandel and Oli Udoh on the roster as backup tackles. Ezra Cleveland could also move across from guard in an emergency, with Chris Reed and Austin Schlottman ready to cover the interior. With cap space tight, I don’t expect anyone incoming for the offensive line.

The argument could be made for safety being a priority after the injury to Lewis Cine. To add depth to the roster, the Vikings signed rookie Theo Jackson off the Tennessee Titans practice squad. The performance of Josh Metellus when deputizing for Harrison Smith in Week 3 makes that position not so urgent.

Cornerback would seem the most likely place if the Vikings were to make a move. The starting outside corners are set for this season. In his third season, Cameron Dantzler is processing into a good cornerback. At the same time, veteran Patrick Peterson was re-signed for another year and continues to be reliable. Minnesota doesn’t have the cap space to try and improve upon these two. Injury has prevented rookie corner Andrew Booth from making an impact. He’s off the injury report this week, and if he can make an impact, the Vikings depth at cornerback suddenly looks much brighter.

Looking for an upgrade on Boyd or Evans is one possibility. However, ESPN has a more ambitious idea and provides a name. Bill Barnwell presented a trade between the Vikings and Los Angeles Chargers. The deal would send Kris Boyd and a sixth-round pick to the Chargers for their cornerback Michael Davis, who would come in as the slot cornerback usurping Chandon Sullivan.

Sullivan arrived via Green Bay to take the place of Mackensie Alexander in the slot, who endured a torrid time last season. While Sullivan has proved to be an upgrade, he has primarily shone in run defense, and his coverage has left much to be desired. Keeping him around ahead of Boyd would still be preferable. As for Davis, he was an every-down corner for the Chargers in the slot last year. However, the signings of Bryce Callaghan and JC Jackson have left him somewhat in the wilderness. Davis has a cap hit of over $9 million this season and next. That’s a lot of money for a player not getting on the field.

The Chargers are likely ready to deal; the question is — can the Vikings make it work? If not, they would need to pursue whatever other options might be out there.