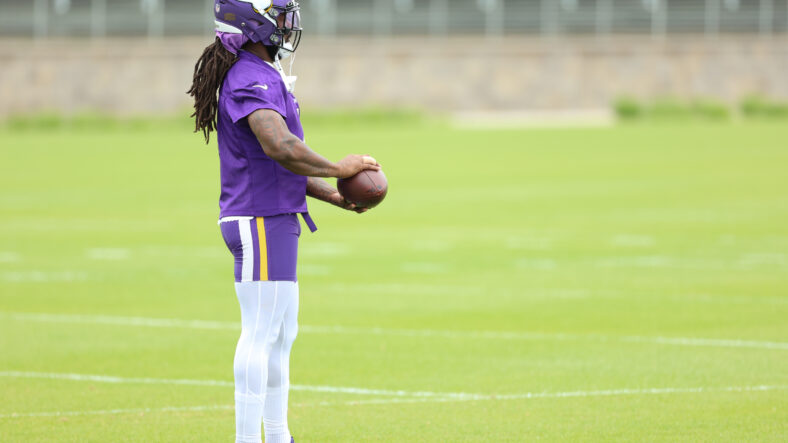 It’s the time of the year when Pro Football Focus is ranking just about everything. In one of their latest articles, PFF names the Vikings running back unit 4th best in the NFL. They rank the Vikings unit led by Dalvin Cook fourth out of the four teams they put in Tier 1.

PFF gives the conditions for this tier which they classify as an elite backfield as a very good starter and good depth. The Vikings backfield reputation largely comes from Cook’s ability and Alexander Mattison as a proven commodity capable of stepping in at any time. PFF writes:

“The biggest question with Dalvin Cook heading into the 2022 season is the same as it’s been for the entirety of his NFL career: Can he stay healthy? Injuries took their toll in 2021 and were reflected in a career-low 65.8 PFF grade. However, Cook is one of the best zone runners in the league when healthy. His 90.3 rushing grade in zone schemes since 2017 leads all running backs. Alexander Mattison, a fourth-year running back out of Boise State, provides quality depth behind Cook and is capable of stepping into the lead role if needed.”

To break into the Top 3, the Vikings need Cook to stay completely healthy for an entire for the first time in his career. The talent is undoubted. He is an elite running back with the potential for more involvement in the passing game. He could become even more dangerous.

Mattison, for the most part, has always filled in admirably for Cook. He has the potential to lead a backfield, and with this being the last year of his rookie contract, that opportunity could be on the horizon. Ideally, he would want a bigger role and a chance to show more consistency. That would also help the Vikings. As much as Mattison did well when called upon if Cook was playing, he took on the vast majority of the workload.

Backing up those two, the Vikings have Kene Nwangwu and Ty Chandler. Nwangwu exploded onto the scene in his rookie season with two stunning kick return touchdowns, leading to calls for him to get given a chance on offense. He did get some opportunities but never provided the big play fans hoped for. His stat line of 14 carries for 61 yards at an average of 4.7 yards per carry showed potential. With the explosion he has shown in the return game, there are still high hopes he can be an explosive weapon on offense.

Chandler is the wild card. As part of the new regime’s first rookie class, he will look to impress in Year 1. If he does, he could be the man to take over from Mattison next year if he looks elsewhere for a more prominent role. Chandler possesses a dual-threat skill set. He is a compact back who possesses good speed. His role is likely to be small this year, but if injuries hit, he has the potential to fill in nicely as the number 2 back.

The Vikings offense won’t wholly revolve around the run game as it has in recent years. However, with strong talent in the backfield, it is still an area the Vikings should look to use often. The best teams have their passing and run game working in unison, enabling both to flourish by not letting defenses look to concentrate in one area.