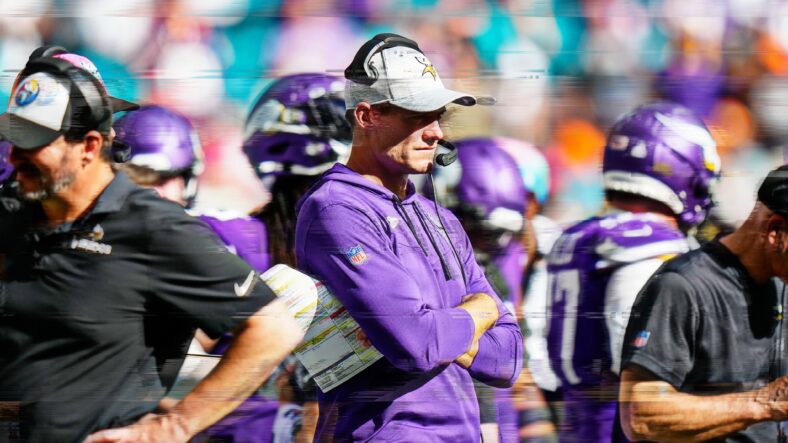 The Minnesota Vikings are cruising in 2022, a development totally unforeseen by most. But one thing separates the franchise from an elite tier of NFL teams.

Minnesota’s 3rd Quarter performance — almost a standalone trait — is the item disallowing the Vikings classification as an elite team akin to the Buffalo Bills or Philadelphia Eagles.

The Vikings 5-1 start has onlookers of the team wondering, “Are these guys for real?” Why? Well, Kevin O’Connell’s Vikings win in kooky ways, never comprehensively beating the tar out of an opponent. The franchise seems to have the depth chart for total domination over various opponents, but most Vikings games in 2022 end within a one-score margin.

Accordingly, Vikings fans consistently ponder if a 2016 cliff dive is upcoming. Six years ago, Minnesota raced to a delicious 5-0 start, crumbled thereafter, and finished 8-8 while missing the postseason. Vikings enthusiasts are scarred, spitballing another possible demise.

However, the 2016 Vikings actually won games somewhat handily, fueled by defense and special teams play. The 2022 Vikings, while flawed all over the place, are winning tight games with grit and a particular phase of the team stepping up like clockwork weekly.

Well, O’Connell could tame fans’ reservations by correcting one big sin — the 3rd Quarter. Minnesota’s performance in Quarter No. 3 is what prevents it from honest-to-goodness classification as a Super Bowl contender. On the whole, the Vikings are pretty damn good in Quarters 1, 2, and 4 but curiously settle in for a nap right after halftime.

Just as the cumulative 4th Quarter score of 51-27 through six games is absolutely glorious, the 3rd Quarter 33-6 split in favor of the opposition is dreadful. Good teams — like those same Bills and Eagles — did or will punish the Vikings for the 3rd Quarter excrement if no changes are enacted.

For context, here’s how those score differentials per quarter rank leaguewide:

The Vikings are an incredibly poor 3rd Quarter football team that somehow “figures it out” in the 4th Quarter. For most fans, it’s a “we’ll take it scenario.” Still, Minnesota can become a Billsian or Eaglesian franchise this year if it exorcises 3rd Quarter demons. Plain and simple.

It is unclear if the tendency can be remedied on the fly because, after all, they probably would’ve figured it out by now. There have been zero productive 3rd Quarters from the 2022 Vikings. Nevertheless, intelligent and upward-trending NFL teams indeed improve as a season wears on. O’Connell’s 2021 Los Angeles Rams can tell you all about it.

Sure, the Vikings field-goal kicking game from 50+ yards can improve. So can the aspect of the defense habitually allowing chunk yardage to opponents. The Vikings must also fix time-of-possession ills.

But if they eventually play like a normal-good team in 3rd Quarter, reasonable Super Bowl hopes can germinate. Until then, you must cross fingers for 4th Quarter heroics — that have been showing up so far.