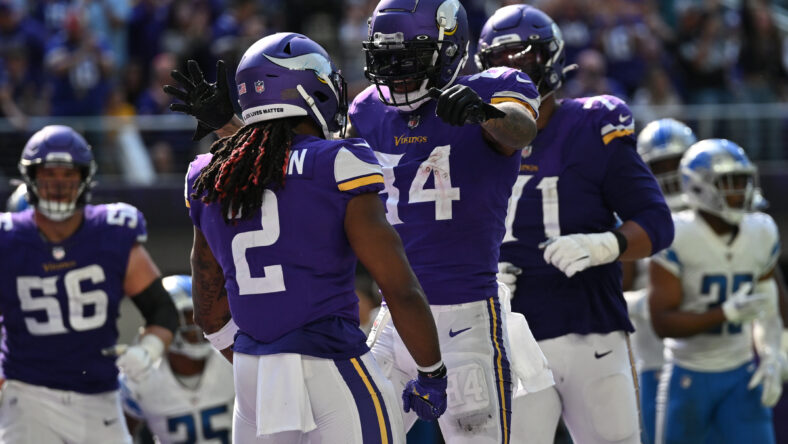 The Minnesota Vikings received a jolt at tight end this week, engineering a deal for T.J. Hockenson with the Detroit Lions.

And because Hockenson is only 25 years old, his addition to the Vikings depth chart spells a ‘lame duck’ fate for incumbent TE1 Irv Smith.

The catalyst for the trade? An injury to Smith. Nearing the end of the Vikings Week 8 triumph over the Arizona Cardinals, Smith suffered a high ankle sprain that will sideline the Alabama alumnus for 6 to 10 games — which may be the remainder of the regular season.

Smith missed all of 2021 due to a torn meniscus.

Because this brand of Vikings — flossing a fancy 6-1 record, the franchise’s best start to a season since 2009 — is serious about Super Bowl contendership, waiting around until next year for Smith evidently wasn’t an option. Before and after the trade, the world considered Hockenson a better tight end than Smith, and that opinion naturally slides Smith to the backseat.

Moreover, 2022 is the final year of Smith’s rookie contract. He needed a healthy, productive campaign. Neither is occurring. Plus, one can’t help but wonder how much this play changed the course of Smith’s career:

While this drop may not have won the game for the Vikings in Week 2, it would’ve served as haymaker back at Philadelphia in a game that later spiraled into a horror film.

The Vikings paid a price for Hockenson to suggest his next contract would involve purple ink. Trading draft capital for the rental version of Hockenson seems nonsensical. That essentially ixnays Smith from the Vikings offseason plans unless his pricetag is incredibly affordable. Smith will hope to maximize his earning power in March while Hockenson remains under the Vikings control until the spring of 2024. These teams could have interest in Smith four months from now and pay him a sum he desires:

If the Vikings make the playoffs — it feels like a safe bet right now — that will be the last hurrah for Smith in Minnesota, assuming he recovers by then.