Not Everyone Is Sold on the T.J. Hockenson Trade 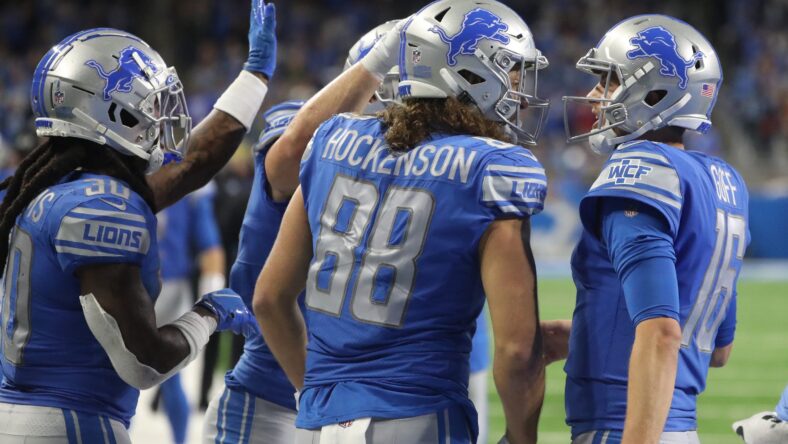 The Minnesota Vikings pulled off a stunning trade on Tuesday, onboarding tight end T.J. Hockenson from the rival Detroit Lions.

And the Hockenson trade arrived about an hour before the Vikings revealed incumbent TE1 Irv Smith would miss 6 to 10 weeks with a high ankle sprain. So, insert Hockenson while Smith’s stock for the future is seriously in doubt.

The trade for Hockenson stunned Vikings fans and national media members. Minnesota was probably always in the market for a tight end as the trade deadline approached, but most calculated the Vikings would end up with a bargain-bin talent.

Bargain bin be damned, the Vikings now pivot toward life with a newfound weapon classified as a Top 10 tight end by most reasonable folks’ estimations.

Yet, not everyone is sold on the trade.

The Athletic published an article after the trade that illuminated the pros and cons of Minnesota’s decision. Chiefly, Mike Sando explained the Vikings possible inexperience in the front office as a detriment, “At worst, this move reflected the Vikings’ inexperience in leadership roles. It’s not difficult to imagine a first-year, offensive-play-calling head coach fretting to his first-year GM about how badly he needs to replace an injured tight end.”

Since joining the NFL, he ranks seventh in the NFL among tight ends via receiving touchdowns and 10th in receiving yards.

“It’s not difficult to imagine such a team making a short-sighted move for a player at a non-premium position,’ Sando added.

Sando finished by complimenting the Vikings potential usage of Hockensons as “a chess piece” and mentioned the Green Bay Packers impending downturn when Aaron Rodgers departs.

Any reservations regarding the Vikings seizure of Hockenson must be derived from two items:

Hockenson has already proved that his skillset is not fool’s gold. He won’t set foot on a field for the Vikings and struggle for an extended period. The Iowa alumnus is already “that guy” at his craft.

On the price, one must ponder the draft capital donated to Detroit. The Vikings traded down two rounds next year and one round in 2024 to land Hockenson. Is that too rich for a tight end — or non-premium position described by Sando? If your answer is yes, the trade is silly.

Moreover, if Hockenson skedaddles after the 2023 season, the final year of his rookie deal, the trade will seem goofy — perhaps even horrid — in retrospect. On the whole, though, it is unlikely Adofo-Mensah bartered for the man as a 1.5-year rental.

While Sando pointed at the Vikings leadership’s inexperience as a culprit for the trade, all that matters is Hockenson’s impact on the offense. That’ll be the verdict.

Trading down two rounds next year and one round in 2024 is not a gargantuan pricetag for a Top 10 tight end — unless he’s wholly ignored like Chris Herndon.