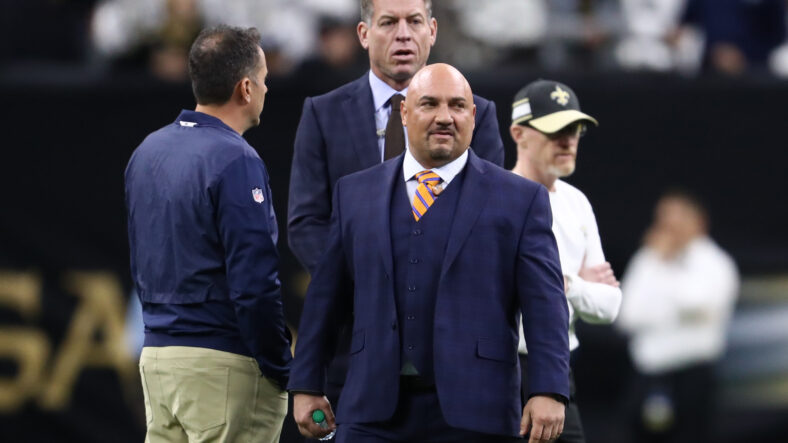 With Snap Yo Fingers from Lil John playing the backdrop, NFL insider Jay Glazer affirmed his enthusiasm for the Minnesota Vikings at the team’s training camp on Saturday.

Glazer, an employee of Fox Sports, was at the team’s weekend practice and posted a short video to Twitter with his observations. Glazer tweeted, “Strike me down as one who thinks the Vikings will surprise some people this year!”

He also expanded on the dynamic between new head coach Kevin O’Connell and quarterback Kirk Cousins, “I think [Minnesota] is going to be one of those teams that makes a big jump this year. If anybody can give the confidence or get the quarterback to calm down and loosen up a little bit, it’s Kevin O’Connell.”

The Vikings finished 7-9 and 8-9 in 2020 and 2021, respectively, paving the way for a leadership overhaul. The franchise tapped Kwesi Adofo-Mensah from the Cleveland Browns for general management and the aforementioned O’Connell from the Super Bowl champion Los Angeles Rams to replace Mike Zimmer.

The NFC community is torn on the outlook for the 2022 Vikings. Most power-ranking outfits forecast Minnesota as about the 20th-best team in football. Other pundits have mentioned the Vikings as a “sleeper” team, similar to the Glazer tweet. In May, former quarterback and current ESPN analyst Dan Orlovsky nominated the Vikings for playoff contendership.

Also in the spring, ESPN released its annual Football Power Index, and the Vikings surprisingly ranked 13th. In fact, if ESPN FPI’s came to fruition, Minnesota would reach the postseason as the NFC’s sixth seed.

And in July, NFL analyst Warren Sharp echoed the Glazer prediction — also in a Twitter video.

Meanwhile, the Vikings win forecast grew by a game over the last few weeks, according to oddsmakers. For most of the spring and early summer, Minnesota was slated for 8.5 wins by sportsbooks, but now the total stands at 9.5 — right on the cusp of a typical season’s playoff entry cutoff.

If Glazer, Orlovsky, and Sharp are wrong with the playoff prediction, it will mark the first time since 2005 through 2007 that Minnesota missed the postseason three seasons consecutively.