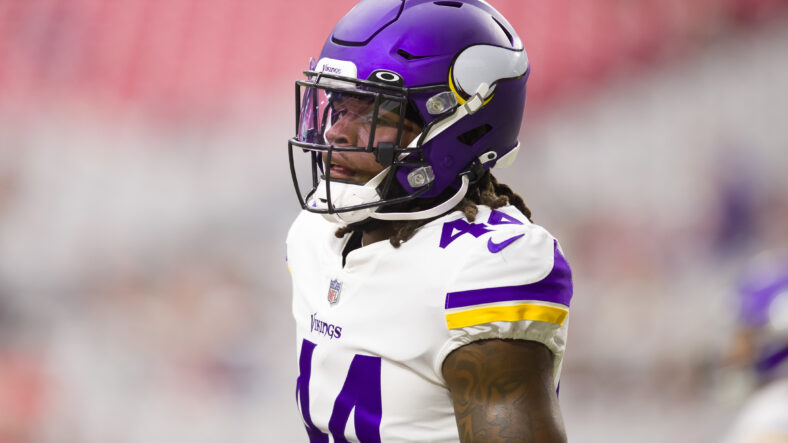 The Minnesota Vikings were able to bounce back on Sunday afternoon against the Detroit Lions, completing a 28-24 comeback victory over their division rivals. While the ultimate goal is always getting the team win, there were a couple of individual achievements during the game as well. Here are the multiple Vikings that hit milestones in Sunday’s win.

Dalvin Cook may have left Sunday’s game with a dislocated shoulder, but that did not stop him from first picking up a big career milestone. With his 17 carries and 96 yards, the Vikings running back became the 146th player in NFL history to record 5000 rushing yards over the course of his career.

On Sunday, Cook moved up 10 spots on the all-time rushing list by moving from 155th to 145th. One of the players he passed along the way was former Vikings QB Randall Cunningham.

Cook’s shoulder dislocation does not seem like it will keep him out of Sunday’s game against the New Orleans Saints in London, either. If he does play, Cook needs just 82 yards to pass Billy Sims to enter the top-140.

Throughout the first two games of the 2022 season, one of the major talking points throughout Vikings media has been how uninvolved Adam Thielen is in the offense.

That all changed on Sunday as Thielen was targeted eight times on Sunday. He caught a team-high six of them for 61 yards and a touchdown. That touchdown was Thielen’s 50th score of his career, and he became the fifth Viking to reach that milestone.

He tied Sammy White for fourth-most in team history, and with two more, he’ll move up to third alongside Anthony Carter. WIth how much the Saints have struggled to start the season, it’s not unfeasible that this could happen in London.

Harrison Smith missed Sunday’s game against Detroit with a concussion, and throughout the week, it was unclear whether rookie first-round pick Lewis Cine or Josh Metellus would start in his place.

Ultimately, Metellus got the nod, and it looks like the right decision after the game. Metellus played well, and on Jared Goff’s Hail Mary attempt at the end of regulation, the third-year safety recorded his first career interception.

We’ll see if Harrison Smith is good to go next Sunda against New Orleans, butt if not, the Vikings should feel confident in their young depth.