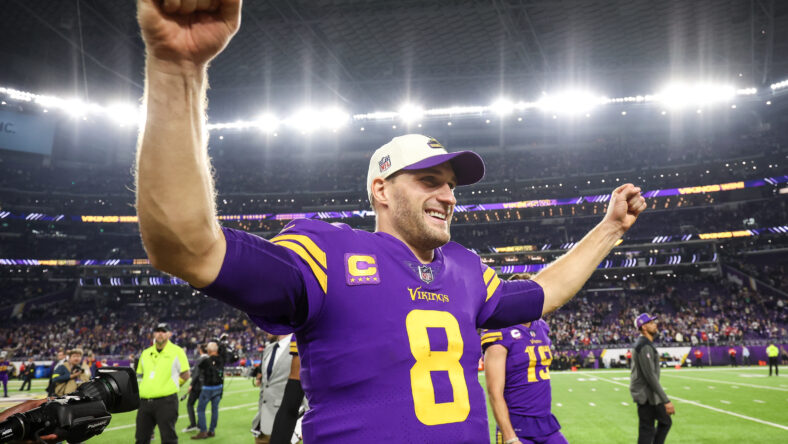 The Minnesota Vikings and quarterback Kirk Cousins got back on track on Thursday night.

Despite a rocky start from No. 8, where a near pick was followed by an actual pick, fears of “one of those games” where Cousins wilts under the bright lights of prim time against a top-tier defense crept in. There was no need to worry, though. Cousins said “be gone” too silly narratives and proceeded to put on a show.

It took until the 4th Quarter for the Vikings defense to turn up and help their guy. However, after the Patriots scored on six of their opening seven drives, Minnesota’s defense shut them down for their final four possessions. Cousins provided another 4th Quarter go-ahead touchdown, and the Vikings finished the game to claim their ninth win of the season.

Cousins got to enjoy the postgame turkey with Adam Thielen and Justin Jefferson. Asked what’s next after the celebration chains, Cousins had a fun idea. Saying he needs to speak to his dentist about some Justin Jeffersonesque grills.

Cousins on the Game

After the game and his date with the turkey leg finished, Cousins came out to face the media. Giving his usual honest assessment of the game, he admitted to enjoying the wins but still feels like he can and should be playing better. This was a good night for Cousins with the eyes of the world watching, the fact that he still wants more from himself. It tells you a lot about the man and the team he is playing in.

In the past, there have been suggestions that coaches and players in Minnesota didn’t give their full backing to their quarterback. The accuracy of that theory is up for debate; what isn’t is how much this team is now rallying around their quarterback.

Cousins’ relationship with Kevin O’Connell is excellent. The evidence from the players has been everywhere, from locker room speeches to plane rides with copious amounts of chains. Cousins shared that a word from Thielen before the game made him emotional and showed the support he has.

Cousins has always been humble and quick to praise his teammates. It was no different this week as he praised Kene Nwangwu for his kickoff return touchdown. He praised the whole special teams unit, explaining that they drew that play up at halftime.

If you had said to me before the season started that there would be people on social media claiming Cousins is the coolest QB in the league, I’d think you were mad, but here we are.

Statistically, this may not be the best season of Cousins’ career. He’s getting credit for game-winning drives this season, though he did plenty of that last season. However, the Vikings couldn’t find ways to close out games, something they are doing this year.

The difference in Cousins this year is attitude. He looks more relaxed than ever, and that comes from his surroundings put in place by the new leadership. We see prominent examples of this off the field, but we also see it in his play. He is taking more risks, which has resulted in increased interceptions.

However, there is clear backing from the coaching staff and trust in Cousins with his receivers. To take those risks to try and win games. As a result, when it goes wrong, as it did early in this game, we aren’t seeing the flustered quarterback we might have seen in the past. Cousins is composing himself and getting back in the game.

Finally, we have Cousins giving a shoutout to a young fan who came dressed as “Kirko Cousins.” The name given to this new cool persona the Vikings QB is showing. That has been the story of the season for me. This Vikings team is fun, both on the field (if you have the stomach for these close games) and most certainly off it. Good things tend to happen when people are enjoying themselves. That is what is happening in Minnesota right now.