Kirk Cousins Is Leaving Meat on the Bone 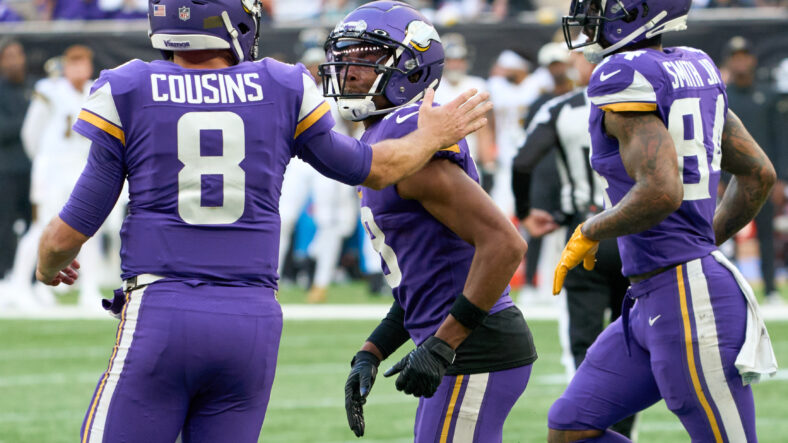 After the first four games, the Vikings stand at 3-1, just barely. They needed a late comeback against the Lions and a game-winning field goal against the Saints for two of those wins. One of the reasons for this is that the Vikings’ offense is leaving meat on the bone.

In the Saints game, the Vikings forced 2 turnovers and only came away with 6 points. One of those turnovers occurred on the Saints’ 20-yard line, and the Vikings failed to put the dagger in the game. This is a huge issue that must be corrected. Not scoring touchdowns will cost them games against better teams.

Then, of course, we have Kirk Cousins, who is again electing to take the easy underneath throws instead of pushing the ball downfield. As of now, his decision-making is a significant reason meat is being left on the bone.

Let’s take a closer look at a couple of plays that could have been touchdowns. Before we get started, it’s important to note these decisions are not “wrong” per se. However, there are better options on the table. Cousins is capable of making these throws.

Kevin Seifert of ESPN pointed out the following play:

There are many people on Twitter saying that Cousins made the right choice. However, KOC noted in his press conference that Thielen is an option here too. This seems to imply that he would like Cousins to take that option.

When watching this play, it’s easy to agree with KOC. As Cousins begins his rollout, two defenders flow to the flat. Sure, if Mundt catches the ball, it is an easy first down. However, we should ask Kirk to realize that two defenders came to the flat. He then knows there is no defender underneath Thielen, and he would have an easy touchdown.

In the video, you even see Cousins point to Thielen after he makes the throw. He knows he let that one slip. This must be a coaching point going forward.

Vikings Coaches Should Ask Cousins to Push the Envelope

The following clip from Nick Olson is another example of Cousins’ current issues. It is a simple misread by Cousins that he acknowledged after the game.

Cousins said that he thought the cornerback was getting depth — AKA going to the back of the endzone to cover Jefferson. However, he actually has eyes on Thielen coming on the crosser. This indicates he was likely the flat defender.

Regardless, when Kirk gets ready to throw, Jefferson has 5 yards of separation. However, Kirk still chooses to go with Thielen. This is not necessarily wrong. Thielen can potentially score if he makes a guy miss.

Although, we should be asking Kirk to make that throw. Some might say that Lattimore will still make a play on the ball. This is doubtful if Kirk puts that ball high and on a line to the pylon. If he does, there is hardly a chance that Lattimore gets a hand on it.

Some will be quick to defend Cousins and say that if Mundt didn’t drop, we wouldn’t be having this conversation. Or that Lattimore would have made a play. I do not buy this. I think Cousins knows he made a misread on both of these throws and would change it if he could.

At the end of the day, it is difficult to be mad. The Vikings are still 3-1. However, if Cousins continues to miss these throws or the team fails to score touchdowns off of turnovers, they will lose games. The Saints and the Lions are not the best of the best, and we barely beat them. We must demand that Cousins be more aggressive.