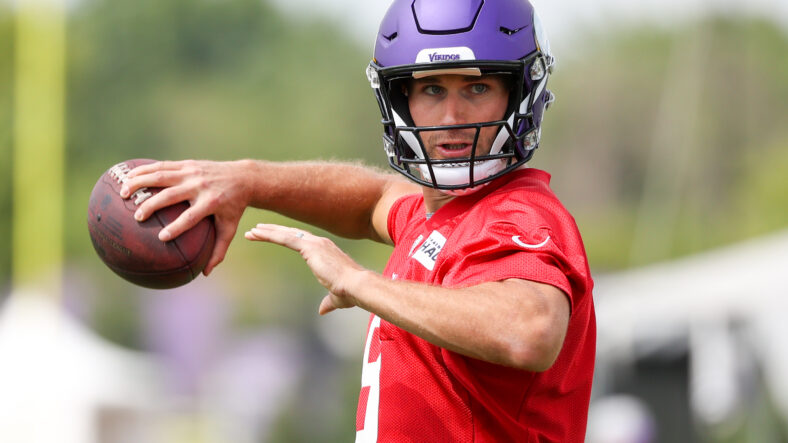 Many accusations have been leveled at the current Vikings quarterback during his time in Minnesota — too much money, can’t win the big games, etc. — ideas that never made much sense as there was plenty of evidence to the contrary.

Kirk Cousins is exuding leadership, and here is the evidence.

Heading into his fifth season in Minnesota, he was voted by the players to be a team captain for the fifth time, a prime example of Cousins’ leadership (granted, it would be unusual for the quarterback not to be a team captain). Only three teams across the NFL don’t have their starting quarterback named as a captain. They are the Cleveland Browns, San Francisco 49ers, and Seattle Seahawks. All three came into the season with doubts about the QB position, which probably explains the situation. The Baltimore Ravens and Dallas Cowboys name weekly captains.

Let’s have some more concrete evidence, then. Back in 2018, former Vikings defensive end Everson Griffen was a leader on the Vikings team, and he would take the pre-game huddle. When Griffen had to take time away from the game due to mental health issues, Cousins stepped up and assumed the role. The signs of Cousins leadership have been there to see ever since for those willing to see them.

Leadership comes in many forms. It can be leading by example — something Cousins does with his attitude to the game. The way he carries himself at all times in the face of heavy and often unwarranted criticism. You’ve never seen even a murmur of a complaint about the porous offensive line in front of him during his time in Minnesota. You won’t see any suggestion from him that the defense needs to be better, which it certainly did in the last two seasons.

Cousins takes responsibility for himself. Before the start of the season, he sat down for an interview with Ben Goessling of the Star Tribune. Where he acknowledged winning was a fair expectation from a fanbase.

The interview gave a great insight into the man that is Kirk Cousins. Upon hearing the news that Ed Donatell was the new Vikings defensive coordinator, he was straight on the phone. After speaking with Donatell, he was on the phone with Harrison Smith, excited by the prospect of what a new coach on the other side of the ball was bringing to his team. Cousins is sometimes labeled as just a stats guy, which isn’t completely fair. However, the only way to change that is to win games and lots of them.

It’s something Cousins is only too aware of, having this to say of Vikings fans. “They don’t go to the game to watch the middle linebacker get 15 tackles; they go to the game to see the Vikings win. That’s always a fair expectation, and that’s where I’ll put a lot of pressure on myself to do whatever I can do.”

Now, the 34-years-old Cousins knows his time is starting to run out. Stats are great, but winning is what matters.

He has two years left on his contract and could finally be in a position to succeed with a head coach that believes in him. His relationship with Mike Zimmer always appeared frosty at best. So far, everything seems more harmonious with Kevin O’Connell, which will only help Cousins as a leader. His leadership qualities have shown already this season in instances like when he took it on himself to give game balls to the new general manager and head coach of the Vikings after the first win of the pair’s tenure in Minnesota.

Kirk’s position as a leader in the locker is evident in the video. There was another telling clip of a sideline conversation with Justin Jefferson, showing him as a teammate in a one-on-one situation during a game. Cousins might feel more comfortable in his surroundings under the new regime in Minnesota. However, his leadership in the locker room is nothing new, as evidenced by former Vikings wide receiver Jeff Badet’s reaction to the video, as mentioned earlier.

Badet was in Minnesota as a member of the practice squad back in 2018-19 and never played in a game for the Vikings. Captain Kirk certainly appears to have made an impression on him, though. Your starting quarterback having that kind of impression all the way down to the practice squad is exactly the leadership you are looking for. Now more than ever, Kirk Cousins is exuding leadership.