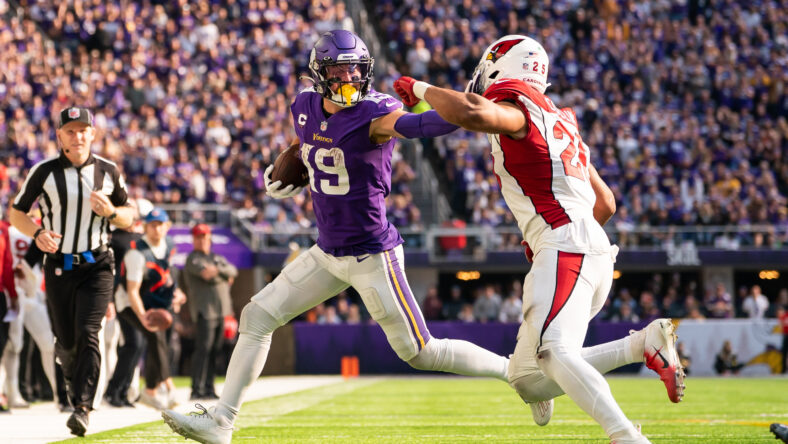 The Minnesota Vikings started 6-1 into a season for the first time since 2009. Even in the successful 2017 season, the team started just 2-2. With every game, we get a better understanding of the football team, and the victory over the Cardinals revealed a few things.

Welcome to the NFL, Ed Ingram

The right guard was drafted in the second round and had to battle his way into the starting lineup against a few veteran options. Chris Reed and Jesse Davis had starting experience in the NFL and are proven players. However, Ingram is a talented guard and therefore ran away with the starting job. His NFL journey has been more up than down so far. He’s clearly the weak link of a much improved offensive line and is allowing way too many pressures.

Future Hall of Famer JJ Watt gave him another ‘Welcome to the NFL’ moment and terrorized quarterback Kirk Cousins. The Vikings coaching staff has to consider benching the rookie for veteran Chris Reed, as the team is clearly too good to keep trotting out a struggling lineman. Chris Reed started 29 games in his career. The Indianapolis Colts were not happy when they lost him, as Reed was a reliable backup, and they could certainly use him with their offensive line problems.

Revenge of the Expendables

Vikings fans wanted to trade away Alexander Mattison for quite some time now, and they are looking for a replacement for the aging wideout Adam Thielen. However, both of the players had a good showing. Cousins targeted Thielen seven times, and he hauled in the pass on six occasions for 67 yards. Multiple receptions were on crucial third downs plays. Mattison, meanwhile, had his number called just five times in the rushing game but gained 40 yards and scored a touchdown.

Both adding another receiver and trading away the backup running back are still possible, but not a likely one. Trading away contributors like Mattison is an unlikely scenario, as he is the insurance for Dalvin Cook, and the Vikings should be sellers at the trade deadline considering their 6-1 start.

Kwesi Adofo-Mensah was hired as GM and had almost no cap space to play with in free agency. A few contract restructures later, he pulled off an impressive class, and all of them were crucial in Sunday’s win. Za’Darius Smith led the way with three sacks and seven tackles. The edge rusher is leading the league in sacks and is still at the peak of his craft.

Fellow linebacker signing Jordan Hicks contributed six tackles. Patrick Peterson, the top cornerback of the Vikings, was technically another free-agent addition. Adofo-Mensah re-signed Peterson to a one-year deal, and he’s playing excellent football. He was back in lock-down mode, reminding folks of his prime in Arizona.

Not many people expected Johnny Mundt in a big role when the Vikings quietly signed him. He had just one catch in the win, but it was a touchdown catch. His role might even increase because of Irv Smith’s injury.

Historically, the kicking position is a struggle in Minnesota. Greg Joseph had an outstanding training camp and preseason, therefore, most Vikings fans expected some stability at the position. However, through the first seven games, they have been disappointed by Joseph’s performances.

Among qualified kickers, Joseph is last in the NFL at both extra point percentage and field goal percentage. While the field goal struggles only apply on long-range kicks, as he made every kick shorter than 50 yards, the three missed extra points are concerning. There are no great kickers available in the middle of the season, so hopefully, the Vikings can figure out the problem and fix it.

The Vikings’ offense had a great day running and passing the ball. Running back Dalvin Cook led the way with 111 rushing yards and a touchdown on 20 carries. The offensive line created holes, and he found them. The aforementioned Mattison relieved him at times and had similar success.

The stat line of Kirk Cousins is surprising, as it reveals four rushes for 22 yards and a touchdown. He showed the ability to scramble out of the pocket on passing plays, and Patrick Peterson even jokingly called him “Kirk Jackson,” comparing him to Lamar Jackson and his elite running ability.

Not only his rushing numbers were good, but also his passing statistics. Cousins completed 24 of 36 passes for 232 yards, two touchdowns, and no interception. The off-script plays were good to see, as those plays were the biggest talking point of his critics in the past. However, Cousins also missed a few throws he usually doesn’t miss. At the end of the day, the offense had a balanced and efficient day. It was probably the best performance on that side of the ball so far in the Kevin O’Connell era.

Some of the previous wins had a fluky feeling. Close wins against poor teams are not ideal for proving how good a team is. The Cardinals game was different, as the Vikings were the superior team and controlled the game against a solid team. They have certainly underachieved so far in 2022. With the comeback of DeAndre Hopkins, the Cardinals started to find some explosiveness on offense, and they are still in the playoff hunt going forward, despite the 3-5 record.

The Vikings are 6-1 with a 3.5-game lead over the Packers and the Bears. All three division opponents lost, and the Vikings also have the tiebreaker against every division team. It would require a gigantic breakdown to lose the division. Per FiveThirtyEight.com, the Vikings have a 93% chance to win the NFC North and a 96% chance to make the playoffs.